"When I saw it was Mike Dean I did worry, I have to say."
-Sir Alex Ferguson, following the 2-1 defeat to Chelsea on Saturday

I don't usually agree with Fergs, but, you know, I'm with the man on this one. Dean did nothing - NOTHING - to quell those fears, s******* the bed in perhaps the Premier League's match of the season. 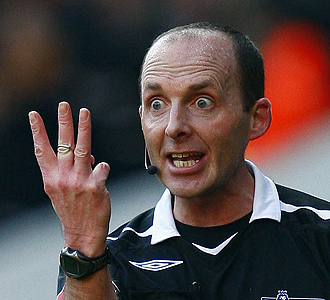 No, you missed more than just three decisions Mikey.

Dean has been demoted to the Championship for this weekend, as has, fittingly, linesman Simon Beck. The pair will take charge of Bristol City's home game against Swansea on Saturday.