Kun to Chelsea a done deal? So sayeth Soccernet

Share All sharing options for: Kun to Chelsea a done deal? So sayeth Soccernet

On the eve of Chelsea's most hugest, largest, wickedest match of the season we have this mess of news from the ever-spinning rumor mill.

Earlier in the week, Sport.co.uk reported that Chelsea and Atletico Madrid had reached an agreement that would give Chelsea first right of refusal on the striker Sergio Aguero. Aguero has been linked with the Blues since this past summer, when apparently negotiations for the player began. 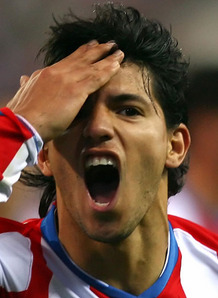 According to the story:

An insider close to negotiations between the two clubs told sport.co.uk that personal terms between Chelsea and Aguero were a formality and that it was just a case of the Blues matching Atletico’s asking price which they have been ensured will not be affected by the player’s performance at the World Cup this summer.

I know what you are thinking. Riiiight. But, as pointed out by reader Zach, Soccernet's Harry Harris is reporting that a deal for Aguero has actually been agreed upon, to the tune of a British record fee of £40 million. This according to "ESPNsoccernet sources."

Who is this source, you ask? Here's what Harry had to say:

A top Premier League manager told Soccernet of the transfer as Aguero lined up for his club in the Europa League semi-final against Liverpool and maintained that it was common knowledge within the game that the deal was on its way.

FYI Harry, Phil Brown is no longer a Premier League manager. But, for real, who do you think this silent conspirator is? I reckon 'Arry Redknapp is foaming at the mouth with rumors. Maybe that's just me ...

Aguero was asked about the reported deal during yesterday's press briefing - a day before Atleti reached the Europa League final - and he did not exactly deny it. He damn sure didn't confirm it, either.

The day before an important semi-final I don't think is the right time to talk about my future.

From now until June I am concentrating on games and doing my best for Atleti. At the end of the season we'll perhaps sit down with the club and decide on a course of action which best suits us both.

Okay, then. Where do we stand guys? Is this Aguero to Chelsea all but done? Nah ...

Thanks to Zach for bringing the Soccernet article to my attention. Respect.