Preview: The Big One

Share All sharing options for: Preview: The Big One

Manchester United. Chelsea. Old Trafford. There really isn't much that needs to be said.

Contrary to public opinion, this is no title decider. No. Not hardly. Five further matches rest on the path before that coveted trophy finds a home. And, considering the plight this season's contenders have taken, there's not telling what may yet happen over the final few weeks.

Still, there's no arguing this match - appropriately being contested at the Theatre of Dreams - will be a defining moment in this season's race. Hey, someone may well emerge from the rubble in a genuine position of power. 1. United consolidates it's position, now four points clear of the pack. Or 2. Chelsea returns to the summit, two points ahead of Ferguson's men. 3. A draw. A f****** draw.

Who shall assume control? Why not the famous CFC? Chelsea could not be in a better position. 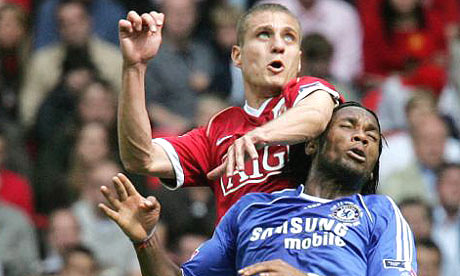 Rooney. Rooney. And Rooney. Over the past three days, the Guardian has published 18 articles centering on England's youthful savior. Yes, 18. Obsessed much?

Rooney's absence Saturday will change the entire dynamic of this event. And yes, it is good news for Chelsea. What would you rather face? The industry, constant involvement and pure drive of Rooney - a man who thrives in the lone role and has carried United by his lonesome at times this season. Or the languid vampire, Berbatov, a striker who lacks real functionality without support - and one who, at least on the surface, appears to lack the hunger of his counterpart? Easy answer.

That being said, this match represents a golden opportunity for the £30m Bulgarian. He must, must, play the game of his career. That's scary considering the talent this lord of the undead possesses.

For those suggesting United are a one-man team (c. Rooney), you must not watch football. Versatile wing play - dynamism in Nani, competence in Valencia. A thoroughly polished midfield, lead by - and it pains me to say it - Fletcher. The often-overlooked contributions of Park Ji-Sung, who likely will occupy much of Mikel's day. And, perhaps most importantly, a healthy back five. Do I need to mention the handle on Drogba which Vidic owns?

This will be a fight.

No fresh injury concerns for Chelsea. Drogba has recovered from the minor calf injury - though it has been revealed that the Ivorian has been suffering from an abdominal hernia for four-plus months - and will start.

The concern lies in the team selection. Ancelotti has already opted not to keep with the unit that swept Aston Villa aside by re-inserting Drogba. But where does he go from there? It really is a bemusing prospect. I haven't a clue.

Key Matchups (other than Drogba v. Vidic) ---
Paulo v. Evra
Ferreira is a bit player. You know it; I know it. He has only made seven league starts for the club this season, all in response to the injury crisis.

Despite his experience - and solidness thus far in stead of Bane - his lack of pace and general frailty is worrisome. Evra is a versatile talent with industry who will provide a constant outlet if allowed forward positions. His overlaps are consistently effective.

Take a look at his distribution against Bolton last weekend and against Chelsea at Old Trafford last season. Limiting his thrust limits United.

If I'm not mistaken Valencia, a forward by nature, was tagged with the responsibility of marking Ashley Cole in the reverse fixture this season. Wow. Expect another defensive shift from the intelligent Ecuadorian. That means Zhirkov must provide a threat similar to what Ferguson will be expecting from Evra. The Russian must drive forward whenever possible to occupy one of Valencia or Rafael.

If Zhirkov can apply himself to Valencia, that leaves young Rafael - I can't see Gary Neville's ancient legs surviving a week like this - against our in-form monster, Florent Malouda. You have to like that matchup.

Potent Potables ---
• Sir Alex Ferguson has lost five of his six meetings with Carlo.
• Chelsea have picked up an average of 2.36 points per game in April since the 2004-05 season. United, meanwhile, have managed 1.81.
• United have won 10 of the 11 league matched Rooney has missed since 08-09.
• Drogs has failed to score in eight league appearances against United.
• CFC have only scored one goal in their last four trips to the Theatre of Dreams.

It's on bitches. KTBFFH