Share All sharing options for: The rivalry: United v. Chelsea

There is a fantastic article in today's Independent discussing how, over the past five seasons, Manchester United v. Chelsea has become potentially England's greatest rivalry.

Chelsea are now the greatest and most enduring challengers in Ferguson's career. As they face United at Old Trafford, Ian Herbert reports on a duel that's reaching fever pitch

I implore you to check it out, if only for another look at some of the great moments in this showcase event over the last few years. Who could forget United providing the guard of honour for Chelsea's first league title in 50 years - and Chelsea returning the favor two seasons later. 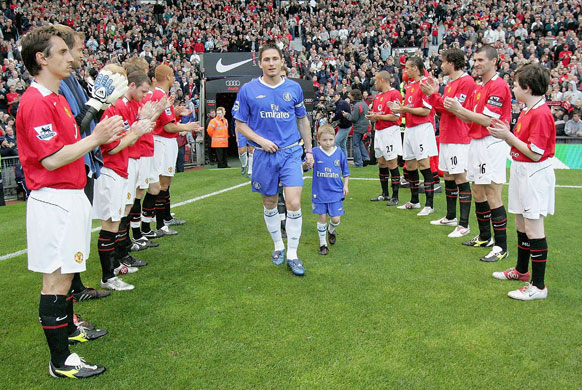 I've snatched this abbreviated highlight reel of the clubs' encounters for your enjoyment. Excellent stuff this.

10 May 2005
Manchester United 1 Chelsea 3
Having already been crowned champions, Chelsea were welcomed to Old Trafford with a guard of honour as Jose Mourinho maintained his undefeated record against Sir Alex Ferguson.

6 November 2005
Manchester United 1 Chelsea 0
Chelsea dominated the first three months of the season, holding a 13-point lead over United, only for Darren Fletcher's looping header to hand them their first league defeat.

29 April 2006
Chelsea 3 Manchester United 0
Mourinho's side overwhelmed United to clinch back-to-back titles. Wayne Rooney broke a metatarsal in his right foot with the World Cup a month away.

26 April 2008
Chelsea 2 Manchester United 1
Chelsea forced the title race to the wire as Michael Ballack's two goals brought them level with United with two games left. United players clashed with groundstaff after the game in the infamous "Battle of the Bridge".