"In his captain's programme notes Frank Lampard revealed that the switch of this fixture to a Sunday meant that he was an absentee best man at his friend's wedding yesterday. In the end it proved so easy for Chelsea that no-one would have blamed him for leaving at half-time to make it in time for the speeches."
-Sam Wallace, The Independent

When the Chelsea team sheet was released prior to Sunday afternoon's footballing clinic, I - and likely many of you, too - were taken aback. Well, to be candid, more like bemused. And concerned.

Come again? The conundrum (thank you ph0bolous) that is Salomon Kalou in from the start? Nicolas Anelka, and Didier Drogba? Malouda in the midfield. It was an odd one - and a right one.

That's the third time this term the famous CFC has netted seven. Add in five (twice), four (three) and three (six), and we're scoring motherf******. Ninety-three for the season. Seven for a hundred? I can see it. 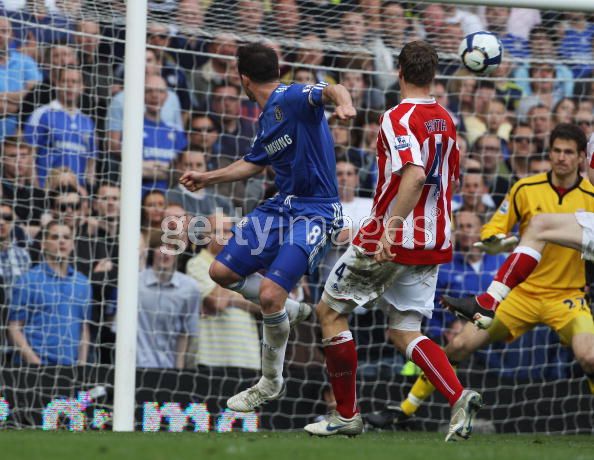 Again, aggressive start = goals. Two early stops from Sorensen perhaps filled a Chelsea supporter head or two with familiar feelings of dread. It proved unwarranted. Drogba, earlier denied by the fine Sorensen, provided the opening half's moment of class, controlling a rather heavy cross-field pass from Malouda by reaching back with his right leg. It was not only audacious, but practical. The Ivorian didn't even have to adjust in playing a searching cross in for Kalou to finish from all of six yards.

It was an avalanche of searing, sultry football from there. Kalou followed up a parried Lampard strike - in the process unfortunately injuring Sorensen - then drew a penalty on the cumbersome Huth. Super Frank finished, and that was effectively that.

The opening 20 minutes after the interval featured Stoke harrowing without much reward, and Chelsea appearing content to frolic its way to the finish. Then, from almost nothing, avalanche v2.0. Lamps unleashed Kalou, who seemingly had the freedom of Stamford Bridge to himself. He waltzed into the area, followed up his own rebound and, in the middle of it all, recorded his first hat trick for the club. Congratulations to the young man, who, hate him or love him, has this uncanny ability to make you forget all the wrong with one right. Will he ever be great, who knows. Is he a fine squad player, I'm beginning to think so (expect a dire performance at Anfield, then).

"It means a lot. It was a very important match for everyone,'' Kalou told Sky Sports after the match. "We have to keep on wining and focus on our game. We did well today - 7-0 is a great result.''

Lampard, on Kalou: "He fully deserves his goals today. Every time he comes on he makes a difference. He's one of those players in a squad that you need because he scores goals."

The rest of the match played out something like this ... Malouda missed an open goal from literally a yard (one of the misses of the year?). Sam Hutchinson, in relief, was excellent. His cross nine minutes from time found the advancing Lampard at the back post; Lamps, instead of the traditional, opted for his own piece of stunning audacity, clipping the ball beyond the substitute keeper Begovic with the outside of his right boot. Ab-surd. Sturridge followed, unleashed by Drogba, and Malouda received a deserved goal a minute from time to seal another lavish afternoon in SW6.

Of note ---
• Michael Ballack. Quite the display from one of the more polarizing figures in this side. Dictated not only the play but the tempo with suave and control. Resisted chance to drive forward. When given time, his passing is truly a world apart. Then again, when will he ever see that kind of space and time? Not this weekend I would assume. Regardless, a fine, fine display from the German.

• Ashley Cole. Took the England international a few minutes to find his rhythm. Once he did, it was clear he is in fact the best left fullback in the world. Some of us, including me, were apprehensive about him returning to the starting XI, what with the excellent Zhirkov exhibiting plenty in his stead. Yet, after Sunday, it's quite clear the gap in talent between these two. Great, GREAT having the both of them.

Moment of the match —
Other than Lampard's grossly underrated chipped volley? The supporters' chant of choice as the match enter its closing stages ... "Are you watching Manchester?" Well, were you?

Honorable mention: Apparently there was a halftime rendition of 'Blue is the Colour' featuring several members of the 1970 FA Cup winning side. Among them: John Hollins, Peter Bonetti, Charlie Cooke, Tommy Baldwin, Alan Hudson and Ron Harris.