Three matches. Three wins. It's that simple, friends. The drive begins Sunday, with a visit by that blue-collar bunch from Stoke City.

This could spell trouble. 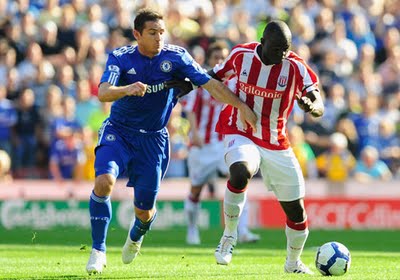 Mr. throw-in is always a problem. Then there is the Pulis factor. Stoke will be cautious, disciplined and likely will be able to keep this tight. All less-than-pleasing factors. Still gotta fancy us here.

Etherington is no Gareth Bale so perhaps Ferreira will be able to somewhat cope with his crossing ability. We've recovered from a rather egregious patch in which we couldn't defend a set piece to save our lives. Given Stoke's tree-like defense, we'll need to continue that vein of form.

Typical nerve-racking, do or die stuff this will no doubt be. Mikel's absence is a blow - and then there's Essien who was going to return for this one then wasn't and now is going to miss the rest of the season, maybe even the World Cup. What the hell?

Drogba is carrying all sorts of knocks so you've got to think Anelka will finally get another chance to lead the line. Will Carlo keep with the in-form Zhirkov or take a chance on the best left fullback in the world? How about both? Me, I would. Deco or Ballack, then? The physicality of this one calls for a Ballack type, with Deco in reserve in case of emergency. Half-worried about the idea of Ferreira - and his limited aerial ability, not to mention his horror show last weekend. I can't see Bruma getting a shout, though, so the veteran Portugese continues.

So no John Terry for this one as he serves his one-match suspension. No problem. His form has been a concern of late, and I'm pretty much sold Bane and Alex will be excellent.

We've been known to respond in style after defeats this season. I expect nothing less Sunday.

Potent potables ---
• Stoke have surrendered more points from a winning position than anyone this season (22). Chelsea, meanwhile, have gained more from losing positions than anyone (15).
• Here's one for you. Chelsea are unbeaten in the last 20 league matches John Terry has missed
• Chelsea has won its last five in all competitions against Sunday's opponent
• Stoke are unbeaten in their last six league trips
• Chelsea have gone 19 matches since last failing to score at the Bridge