how we will always love you.

Select quotes from Jose following the brilliant win over Barcelona on Tuesday. As you would expect, these are instant classics. This man will always - always - be welcome at Stamford Bridge. 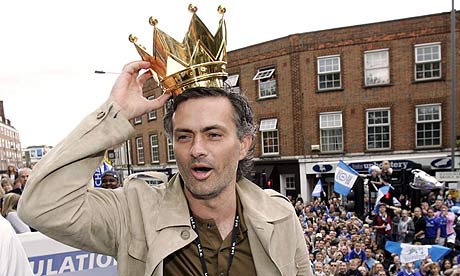 Barcelona felt aggrieved not to have won a penalty, but Mourinho pointed to last year's semi-final when Chelsea had several appeals rejected against Barca.

"It's a pity. A year ago Chelsea were crying and Barca were laughing with the referee," said ex-Blues boss Mourinho.

"They laughed because he denied my Chelsea boys their rightful place."

And later, when discussing the apparent quarrel he had with Barca midfielder Xaxi in the tunnel following the match, Mourinho came up with this gem ...

"I love Xavi and can never have any problems with him. I have known him for so long and love him. When I went to greet him in the tunnel at the end of the game, he spoke about the referee and I said he must have been talking about the referee (Tom Henning) Ovrebo from Chelsea-Barcelona last season, not this game."