Essien likely out for rest of season

Share All sharing options for: Essien likely out for rest of season

Last night, I was greeted by some excellent news. The Guardian was reporting that our dynamic Ghanaian, Michael Essien, was in line to return on the weekend against Stoke City. That would have been superb.

Key phrase being "would have." 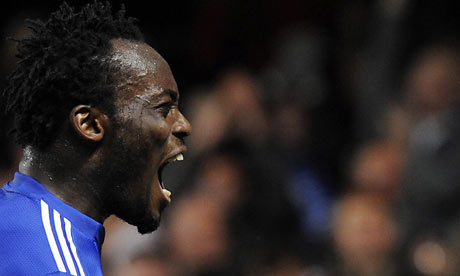 The club's official site today, in its training report, released news of the contrary. In fact, super contrary. "Samsonite? I was way off."

The club confirms Essien will not in fact be in the squad for Stoke. It also questions whether or not he will return before the end of the season.

Didier Drogba was fully involved in the session despite his ongoing hernia problems, but absent was Michael Essien, who contrary to media reports will not be in the squad for the weekend's game against Stoke City at Stamford Bridge.

The Ghanaian's participation in the remainder of the campaign is now in doubt, with only four games to play including the FA Cup Final on May 15, while Carlo Ancelotti reiterated at the weekend that any decision on an operation for Drogba will be taken by the player himself.

Damn. This is becoming more and more worrying. Essien was supposed to return within six weeks. It's now been some three months. Could this be a career threatener? Let's not even go there.

Other squad news
As you can see in the above quote, it looks as if The Drogs will be fit enough to have a role against Stoke. The Guardian reckons Ashley Cole will be in the mix, though I don't think I would sacrifice the in-form Zhirkov for him. What kind of message does that send? And Mikel is doubtful after suffering a knee injury at Tottenham. We're still awaiting word on the extent of the damage.