By tomorrow night, we may very well know where the Premier League title will rest in a few short weeks.

A few hours following the Manchester derby (Tevez, get right), the league's two form sides meet in, yes, another London Derby. This one, easily the most important of the season - for both clubs.

Tottenham, chasing what has been most elusive in, well, forever: the Champions League. Chelsea, seeking a return to the summit. Not excited? Then you're not breathing. 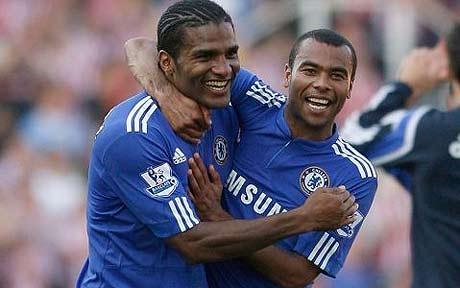 Could these two be on the pitch at the same time tomorrow?

No team will play a more pivotal role in this season's Premier League race than Tottenham. Arsenal (April 14), Chelsea (April 17), Manchester United (April 24) - quite the run-in. And, to think, they've already effectively eliminated Arsenal from the title picture. Two to go...

Spurs have taken 16 of the last 18 points available at White Hart Lane. The hosts have conceded just 11 league goals at home. Chelsea have scored 32 away goals. Something has to give.

Injuries, and a certain suspension, will play a role for 'Arry Redknapp's side. The absence of Aaron Lennon, not quite fit, is always going to be a blow. The lack of the dynamic Wilson Palacios is also a body shot. Niko Kranjcar is also missing, ruled out for the rest of the season on Friday.

All three of those men were missing Wednesday, though - and Spurs still gave Voyeur the gas face for the first time in a long, long while. We must be wary of those who will play.

Among them is the lanky Brazilian Gomes; he was amazing against Arsenal. Arguably the best keeper in England, eh? Modric, influential - a potential target in the summer? There are some players in this side. Also: Does anyone else seriously doubt the idea of Ledley King playing two matches in two months, let alone two in a week. If he's in the XI, I'll be shocked. Shocked.

No team with such a league lead at this stage of the season has failed to win the Premier League in its history. No pressure, then?

We already know, via Carlo, that Deco, Joey and Flo will be in the XI. Excellent. The rest of the side pretty much picks itself at this point - assuming Bane is still not match fit - aside from striker, of course. Who to chose, who to chose?

There isn't really a bad choice. Personally, I prefer the movement of Anelka and how his contribution results in a more balanced attack. Still, though, the Drogs evokes fear in any backline - against one consisting of Bassong and Dawson, he'll be giddy as a schoolgirl at that prospect.

Oh yeah, and Ashley Cole will be on the bench. How sick is that?

Potent potables ---
• Tottenham are unbeaten in their last three home games against Chelsea, winning two
• Chelsea have failed to score in just three of their 17 league trips to WHL
• Chelsea have won their last four league games in; they have not won five straight since last November
• The Blues have scored in each of their last 15 league games
• The Blues have conceded only two goals from outside the area in the league this season
• Chelsea have scored an average of 4.17 goals per game in matches that Didier Drogba has missed this season compared to 2.14 when he has played
• Tottenham have kept three clean sheets in 17 league meetings with Chelsea at White Hart Lane
• Spurs have won four of their 62 league matches against Arsenal, Chelsea and United since the turn of the millennium
• Only Portsmouth (33) have used more players than Chelsea this season (30)