The road to a first-ever domestic double remains open.

A match that was, for the neutral, largely a bore results in a second consecutive FA Cup final appearance for the famous CFC. Never was this going to be the exhibition witnessed only a few weeks prior. And, by no means, was this an easy match. 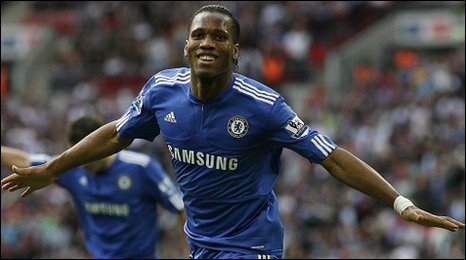 Villa controlled large periods of this one, flooding the midfield via their 4-5-1 while our midfield struggled to combat. Imposing ourselves was not a walk in the park this time. Yet Villa never created much in the way of scoring chances. In fact, I can't even remember Cech being tested.

And, as time waned and, as Terry so acutely mentioned beforehand, Villa tire late. So they did Saturday.

As they began to chase a goal following our opener from the Drogs, Chelsea began to exploit gaps at the back - particularly Kalou, who in stead of Joe Cole, really sparkled. So, too, did Ballack after he came on for the also impressive Deco. Villa chased and chased to no avail, with their lack of fitness woefully apparent.

It's not difficult to dissect. Smallish squad on a relatively tight budget by today's league standards. These current seasons are simply too long for this side. Perhaps Martin O'Neill's decision to reevaluate his future at the end of the term is appropriate.

Two goals in the final five or so minutes added gloss to a industrious win, but who cares? A return to Wembley then, to face the man who "led" us to our only Champions League final. A great story Portsmouth is turning out to be; too bad this is a fairytale I won't be admiring.

This is a tough one. Much of what made this display great was not individual accomplishment but rather that it was a result bore out of an assemblage contributing to the whole. Here goes...