The man who made 222 appearances for the club, winning the 2000 FA Cup, is - to put it mildly - not a fan of his former club in its current mold. In fact, it's time to wield the ax says Desailly. 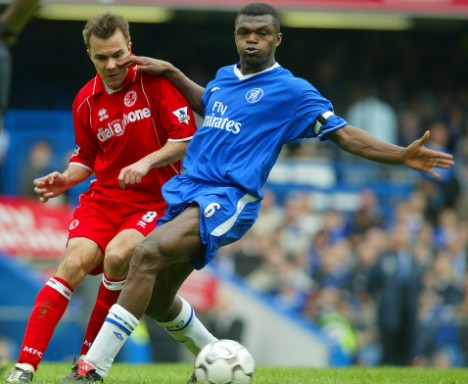 "First they need to get rid of four or five guys who are not Chelsea players," the Frenchman told the official website of the Premier League. "I think five players have to leave the club. After that it depends on the finances. People are talking about [the Bayern Munich winger Franck] Ribéry but Ribéry is a problem because they have [Florent] Malouda on the left. I'm not sure if they will spend again."

Next, the 1998 World Cup winner takes aim at a few Chelsea players in name: Joe Cole and Michael Ballack. Now this, this I can't argue with. Except for the fact that we just win with Ballack in the side. Do you think Marcel has done his research on this? Either way, he makes a good point.

"Obviously it looks like the midfield have not really delivered protection to the defence," he said. "The defensive block have had some problems this year, that is why they are not four, five or six points ahead because they have lost many points on free-kicks and just generally losing their concentration.

"Previously the midfield was absolutely amazing. Even if they weren't winning the Barclays Premier League, it was holding the team. The midfield was really playing well. Now Joe Cole is not expressing himself as he wanted, (Michael) Ballack has disappeared the last two months, (Jon Obi) Mikel is playing his best, but the team misses Essien. So this is why the defence is suffering."

Then, Desailly backs United for the title. Say it ain't so, Marcel. Not cool.

"When you look at the two teams, United have a small advantage on the consistency they are showing in the midfield. Absolutely amazing. Players like [Darren] Fletcher, Nani coming back at a high level and [Antonio] Valencia have made a contribution. Let's not even talk about [Ryan] Giggs. Right the way back to [Edwin] van der Sar, it's a real team, a group. That's why I believe that Manchester United today have more energy than Chelsea."

We'll see Marcel. I'm backing my boys, you should too.