The holders attempt to take a further step toward a repeat at Stamford Bridge against Tony Pulis' hardened, effective Stoke City side. Did I mention they eliminated Manchester City in the last round? Yeah, this one should be a test. 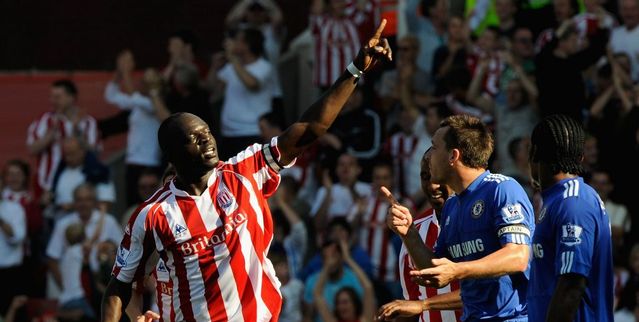 This guy will pose a threat.

Stoke have been in solid form since the turn of the year, losing just once in 2010 - last week against Arsenal. Their last away defeat was on Boxing Day.

It's potentially a disastrous matchup for Chelsea, what with our recent defensive frailties and the Potters' physical, aerially-centric attack. Fuller can present numerous problems for defenders, as can Tuncay; both are industrious types. Add in that ferociously-sized backline, and it could spell trouble.

Stoke also has history on their side. The Potters defeated Chelsea in the teams' last domestic cup meeting at Stamford Bridge. Paul Peschisolido was the lone scorer on that day in 1995.

Three losses in five matches in all competitions. That's almost unheard of for a side the caliber of Chelsea. Last week's 4-2 defeat at the Bridge to Manchester City is probably the most unpalatable of them all. You would expect a response tomorrow. Then again, this hasn't been your normal season.

As if results weren't insufferable enough, injuries have begun to take over. Most recently, Bosingwa was ruled out for the season and a setback for Essien was revealed, which leaves him at least two weeks away. This with Cech and Ashley Cole already long-term absentees. Zhirkov may not be ready and Carvalho also appears a doubt. We're down to the bare bones here people.

This still is Chelsea, however. A win is expected; a win is the only result that will suffice.

A full-strength side should be on show - this is not a time for youth experimentation (and I'm not talking recreational drugs).  The question is: How do we get these guys some rest from now until the end of the term? Difficult.

More unknowns ... Does Matic find his way into the XI in the absence of both Ballack and Belletti? How does the back four line up if both Zhirkov and Carvalho miss out? Has there ever been a better time to give Turnbull a look?

Key stat: Chelsea have suffered just one defeat in their last 21 FA Cup matches (at Barnsley, 2008).