Let's be real, anything but three points here and the Premier League crown is not coming to Stamford Bridge. Again.

As one CFCnet poster put it: "We need eight wins now, including at Anfield, Old Trafford and White Hart Lane. If the players don't manage at least 22 points out of 24, then they don't deserve to win the title."

Saturday's result at Ewood Park was, personally, the low point of a roller-coaster season so far, a performance that begged for more. Forget Wigan, that was brutal to watch. Will the boys, obviously low on confidence, be able to rebound against a Portsmouth team that are hardly playing like a relegated side?

You know, Pompey have what we so desperately need right now: Spirit. Determination. Fight. Cheers to them for battling in the face of a lost cause.

We can only hope Chelsea observe this, are motivated by it and subsequently find a renewed spark. 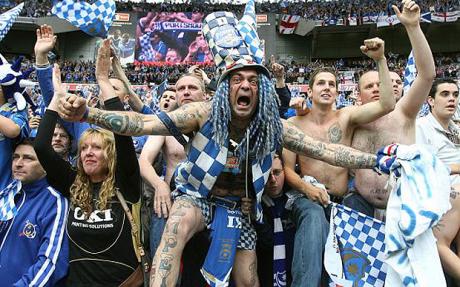 These guys know how to party.

Expect a host of changes.

The main news out of the camp since Saturday is that Bane will be missing for at least a month after suffering a torn MCL against Blackburn. Lovely. This injury list is depressing. We have no choice but to deal, though.

I would assume we'll see Zhirkov on the left and Ferreira on the right with perhaps a recall for Carvalho to pair John Terry in the center of defense. Mikel remains as the anchor.

Anelka must be dropped. Ballack to be rested. Get Joe Cole a start. If he can't raise his game for a moment like this, then let him walk. Sturridge, too, should be in from the go. Time for a fresh look, and some fresh legs.

Perhaps this team will finally regain a cutthroat mentality. Realizing how significant a two-goal advantage is would be fantastic to see.