Share All sharing options for: Cech is back - good. Ivanovic is out - bad.

I was waiting to post until I had some good news to report. So today we find out Petr Cech is fit to return tomorrow against Portsmouth. Though BAWSE has been serviceable, perhaps even better than expected, in his stead, it's great news to know the Czech is back in the fold. Excellent (in Bill S. Preson, Esq., voice). 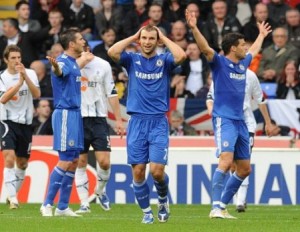 Then I read on to find that our beloved Branislav Ivanovic, perhaps this season's player of the year, will miss at least a month with a torn MCL suffered in the forgettable 1-1 draw at Blackburn at the weekend. What does that mean exactly? Well, he'll likely miss five of our final eight Premier League games - including that pivotal match at Old Trafford on April 3.

Most heinous (Ted Theodore Logan voice). So then, that leaves us with Paulo Ferreira, Juliano Belletti and Yuri Zhirkov as experienced fullbacks. S***.

It just keeps getting better.