Moving forward, as fast as we possibly can, from Tuesday. Sunday marks the beginning of a three-game stretch in seven days that will undoubtedly go a far, far way in deciding the next Premier League champion. It all starts at Ewood Park, always an uncomfortable venue. 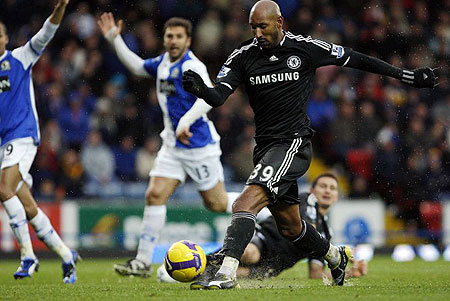 Need more of this. Desperately.

Rovers have lost three of their last five matches, including their past two. That's not to say that Blackeye hasn't played well - they weren't half bad in either of those losses, against Liverpool and Spurs. Expect Big Sam to set up a side similar to Jose's in midweek, which may make for a frustrating afternoon/evening in the Northwest.

This Kalinic character is fairly good, so we may want to keep an eye out. Pederson has regained some sort of form, and then there's El Hadji-Diouf - good lord. Paul Robinson, who hasn't been that awful to be fair, will be missing for about a month in Rovers' goal. Nelsen is also a key piece at the back that will not be available. Not good news if your last name is Allardyce.

The plan, then? Attack Michel Salgado at every opportunity. This cat is pants.

Expecting a defiant response from the boys at Ewood. Our midfield should at least be able to choke the s*** out of this game unlike on Tuesday. Perhaps Super Frank will in fact be super. Mikel wasn't as bad against Inter, at least in my opinion, as many were suggesting.

How will Drogba react? Hopefully like he has so far this term: with a couple more league goals. Can Anelka unearth some confidence? I think it's unlikely Flo will be slowing down, so get him the ball and let him do his thang thang.

"I put in the last game some young players to improve their experience," Carlo said. "Now we have an idea to put our best line-up because for us it is like a final and I want the best line-up. We have to play the best team ..."

I guess that rules out the possibility of rotation until at least Wednesday. It pretty apparent by now that Ballack simply cannot play three matches in seven days; and then there's the rest of our elderly. How Carlo manages them during this mini-stretch is of utmost importance. Ballack may sit Saturday, but I think it is more likely we will see Belletti in relief at Pompey - allowing Der Kaiser to feature in two of the three games.

Another of the questions is, what to do with Anelka? Clearly off the pace, clearly ineffective over the past few weeks. But who will supplant him? Funny enough, Kalou and Sturridge are keeping Anelka in the team. To be honest, I'd probably like to see Kalou from the start Sunday but I do not see it happening. So, our XI will likely be the same from Tuesday.