It's not been a good week for the artist formely known as England's Brave John Terry. Hell, it hasn't been a good a year for the former England captain.

First there was this: As Terry was attempting to leave Stamford Bridge following Chelsea's woeful elimination from the Champions League on Tuesday in his SUV, the CFC captain, trying to barge his way through a pile of paparazzi, accidentally hit the stadium's deputy security manager. The man suffered a badly bruised leg, of which Terry was unaware. Luckily, the two have spoken since and seem to be on good terms. Hooray. 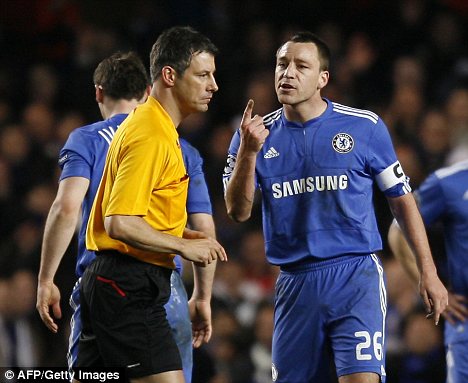 Now there is this little bit: The Daily Mail and News of the World have quotes from Terry in which he lambasts Wolfgang Stark, Tuesday's referee, and demands UEFA take a look at what has happened over the past two seasons.

"It is not good enough at this stage of the competition. We were at home and we didn't get one decision. We do our best to get ourselves in this position and for two years running we get let down by bad refereeing. We need someone at the club to take it up with UEFA.

"I'm not going to say the word conspiracy. But I'm so frustrated by what happened. The penalty on Didier was blatant and how the referee and the linesman miss those decisions frustrates me.

"When a decision didn't go our way I, as captain, went to speak to the German referee and he turned his back on me. We spend two years talking about respect and he does that and refuses to talk to me. I'm pulling and pushing our players away from him throughout the game and he turns his back. I wasn't shouting. I went to try to talk to him and when he wouldn't talk that is when I got frustrated. That is just pure disrespect."

Terry went on to say: "Players could lose their place in the team because of the Inter performance. But the referee last year was back in refereeing a week after our game. It has to be looked at. We are disappointed that we are not going through but I can't look any further than the referee's performance. If I get myself in trouble, then so be it."

Not good. So, what do we think? Three-match ban for Terry then? I mean, UEFA already doesn't like us...