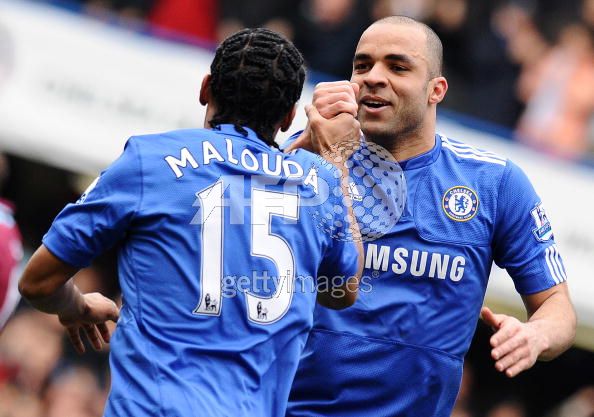 A pair of top performers embrace.

Points of Interest:
Flo's magnum opus?
What is there to say? The Frenchman was simply amazing on Saturday.

It's unlikely Florent will encounter another fullback as timid as Jonathan Spector this season - well, maybe, Blackburn remain on the calendar - but take nothing from what was a superlative demonstration of attacking menace and execution. At times, most of times really, he was unplayable.

"That was the best performance of Florent Malouda," Ancelotti told the official website. "He did very well, worked for the team, did fantastic assists for goals and I hope that he will play like today on Tuesday. He won't play left-back."

The return of Le Sulk?
Not really, but damnit. This man is frustrating. Such an interesting piece of this bizarre puzzle.

I understand his goal - I really do. You can see his growth as a player in the willingness to drop almost into a link-up role for us. Ballack and Lampard enjoy drifting into the channels and, without Essien whose influence becomes more apparent with each passing match, that leaves few options for Mikel. That is until Anelka presents one. But, then, this only produces problems in the final third.

Speaking of options. There were few. Service was in abundance - thanks mainly to Malouda - but only Drogba provided a head for which to aim. Where was Anelka, you ask? Usually in midfield obviously.

And, of course, there is Anelka's apparent refusal to participate in our free-flowing system most of the time. Why on earth does he continue to slow what always seems a threatening buildup with his decision to dwell in possession. Make a decision, man: move the ball, either through a pass or an incisive move.

I still like Anelka; I feel he no doubt can provide what he did in January before this term closes. But this recent barren run is wearing. Guaranteed he will not be dropped, however - even if that may be the best current course.

Zola's team selection
It was bemusing. Diamanti and Carlo, two players featured in my preview, were left on the bench in favor of a front three featuring Mido, Ilan and Kieron Dyer. Really?

Was Zola that angry after the flop against Bolton. Or was this tactical? Either way, it did not work.

The Great Mikel v. Commentary Debate
"If I were to pick who's a better holding midfielder out of Mikel and Parker, I'd have to go with Parker"

Not that the match commentary wasn't dreadful throughout, but the above quote, uttered late in the second half, really pushed me over the top. It also spurred me to comment on Mikel, who again quietly put together an excellent game.

Parker, as influential as he was today - and believe me he was - is no match for Mikel in an anchor role. Hell, he's not even a defensive midfielder. Also: The two in charge of calling this match also said Parker would walk into the Chelsea XI. Are you kidding me? On with Mikel.

The Nigerian held our midfield together during a first half in which both Ballack and Lampard were subpar.  The young man is such a key for us in the way he not only commands his area but dispossesses opposition and distributes accordingly. Some work on his aerial positioning - i.e. today's throw-in that led to Parker's blinder - and he could easily be one of the best in the world in the deep play-making position.

Stat of the match: According to the official website, Malouda delivered 16 crosses. Yes, 16.

Player Ratings
RAWSE 7
Competent, which is more than you would have expected given the clamor about inclusion amongst CFC circles. Not much to do, to be fair, but did so with relative comfort. Pretty good distribution as well.

Bane 6.5
An unexpected letdown given his supreme performances this term. A couple of rare lapses in the opening half. Still the man, regardless.

Alex 8
Another fine display from the Brazilian. No reason why he should not be included in Tuesday's XI.

BJT 7.5
Teflon. It was from his driving run that our second was unearthed. Could his form correlate with the inclusion of Alex? Need more of this as the season draws to a close

Paulo 7.3
Positive. Dependable. Linked well with Malouda throughout; the left channel was clearly our ticket to success. Lucky not to have been punished early for some indecisive defending - Ilan blazing over from at best 10 yards - but was solid in the aftermath.

Mikel 8
Our best midfielder on the day, as mentioned earlier.

Ballack 7
A sharp second-half performance helped erase - somewhat - a pedestrian opening 40 minutes from the German captain. His distribution was wonderful after the break, as was the movement. Incisive.

Lampard 6.5
Not exactly at his best. A first half in which he labored, and left Mikel to grind out our situation in the middle, was atoned somewhat by a second 40 in which he was unlucky not to score.

Malouda 9.5 (MOTM)
Carlo said it was the best he had ever seen from the Frenchman. Who could argue? Our most active, incisive, threatening player all damn day. Two assists and a thoroughly deserved goal. Sterling.

Anelka 6
Again, just not there. Refer to my above rant.

Drogba 7.5
Was in the mood. Thankfully. Two more in the tank in the race for the Golden Boot.

Joe Cole 7
I thought he was quite bright in his cameo. Looked to move the ball quickly - unlike Nico - and provided some good movement as well.