The Arsenal invade Stamford Bridge in a few hours aiming to eliminate last weekend's debacle from the collective footballing mind. Chelsea aim to dish out a knockout blow to the Gunners' always-shrinking Premier League title dream. Forget a knockout, let's just kill it off completely.

There's really not much buildup needed is there? After all, it's a London Derby. And it's Arsenal. So, with that being said, here is my four-point presentation on why Chelsea will win and Arsenal will fade into the abyss -- again.

Why the Blues will triumph...

1. Men lie, women lie. Numbers don't
The almighty Shawn Carter (Jay-Z) may not be having much luck on the hotel entrepreneurial front at the moment. Nonetheless, with a net worth closing in on a billion, the man is quite a wise individual. The bold text above attributes to that fact. Where am I going with this, you ask? Well, have a look at the results of the past eight matches in which Arsenal have played either Manchester United or Chelsea.

Eww. It's such a poor run that Wenger didn't even believe it when confronted with the statitistics this week: "It cannot be," he said. "In the last three games against Chelsea we lost two and won one ... And last year I believe we beat Man United at home. I don’t understand the statistics."

2. We have England's Brave John Terry

I'm surprised to see so many, including distinguished colleague Martin over at Arsenal Offside, even half-heartedly questioning the man's commitment to the cause -- or even the team's -- following the midweek saga that saw him stripped of the England captaincy. Terry's a fighter -- regardless of your feelings for the man, you must know this. If not, I believe he reminded you with a pair of imperious performances against Burnley -- in which he scored the winner -- and Hull, despite the result. The man responds valiantly to adversity, and I expect no different against the Arsenal.

Futher more, his load has lightened. Captain of England is quite the burden. Terry, freed of the media shackles that accompany that role, may -- dare I say -- expand his game. This does, after all, allow him to focus soley on football. As put by Jonathan Northcroft in The Times:

"Like Frodo when he cast off the ring, Terry will find living and breathing a whole lot lighter without the national armband. He still has his marriage to save but no longer has to try to cling to status and the television news helicopter which hovered above Chelsea’s training ground last week and followed Terry, OJ Simpson style, on his road journey to Wembley for the Capello meeting, is now back in the hangar." 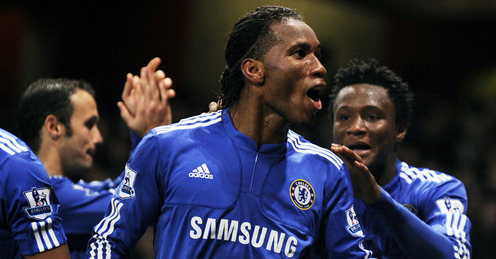 Welcome to the Thunder Dome. And Drogba is Master Blaster, only without the whole losing to Mel Gibson part. And being mentally handicapped. But I digress.

The rather large Ivorian has 10 goals in 11 matches against Sunday's opponents. He has also never lost to the Arsenal. Basically, he's a tormenter of all things Wenger.

His return does, however, bring with it baggage. Drogs' month away in Africa forced manager Carlo Ancelotti to rework his system. The result: an adaptable, fluid 4-3-3 formation that swept aside all. A perfect 5-0-0 record featuring some truly breathtaking football -- and goals, plenty of those -- defined January. Drogba's  first game back, in midweek, resulted in a lethargic 1-1 draw at Hull City. I don't think there's a question of Drogba's inclusion Sunday. There could be a Diamond v. 4-3-3 debate, though; how will Anelka react may be the real question?

It's not a slight. Well, it is slightly. But facts are facts.

Chelsea envoke toughness, both mentally and physically; a hardened, effective approach that,now, is implementing fluid, attractive football. Scary. Arsenal have always had the flair, the toughness not so much. Manchester United, particularly the seemingly light-weight Nani, didn't seem too intimidated last weekend. Rooney's bulldozing slash technically-sound play was no match for anyone on the opposing side. A motley crue of midfielders -- Paul Scholes, Michael Carrick and Darren Fletcher (what a trio!) -- comfortably subdued the supposedly unsubduable Cesc Fabregas.

While I'm sure Arsenal will offer more Sunday -- they have to -- I'm not convinced the result will be any different. Where will the leadership come from? The grit? No one is coming to mind.

Prediction
Tight. Cagey. Perhaps ugly?  If so, the match favors the hosts.

A mistake by Arsenal, though, could frature an already fragile side and result in a landslide (lets hope). I simply can't see a loss -- Chelsea has claimed 34 of 36 points at Stamford Bridge this season, mind you. 2-1 to the Blues with Drogba continuing to terrorize and Joe Cole finally breaking through. Up the Blues.