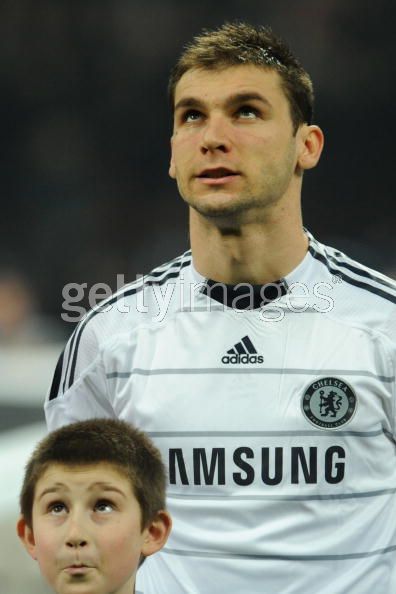 Things are definitely looking up for this man.

Cech 7
Continued his recent trend of impressive, assured performances. Certainly not at fault for the early goal, and had no chance at Inter's second. Night cut short via what appeared to be a serious injury at the time. Expected to miss 3-4 weeks (calf) - we are fortunate.

Bane 9
Trademark. Except, maybe, that this display was the best of what has been a stunning run. It was Bane, not Terry, who provided the inspiration - that real drive. Pretty amazing.

Ricky 7
Thought he did fairly well. Nothing left to add, really.

BJT 5
Worrisome. Played Milito onside, then was easily skinned for the opener. Allowed Eto'o space not too long later that should have resulted in a second. Tackling and distribution was solid, but these recent blips are beginning to add up.

Flo 7.5
Masterstroke by Ancelotti to slot Malouda in at leftback. Linked up with Kalou well, and though he was caught out on the rare occasion, was relatively effective in muting the almighty Maicon.

Mikel 8
Strong once again. The boy is becoming a man.

Ballack 6.5
Not Der Kaiser today. Fairly good on the ball, but didn't really apply the control we needed, especially with Lampard not 100 percent. Easily outclassed what was offered by the Inter pairing Stankovic and Motta, though.

Super Frank 6
Clearly not fit. Was exhausted. Still wouldn't have anybody else.

Kalou 7.5
Good. And bad. His great positioning and direct play led to a deserved away goal -- and should've resulted in a penalty to close the opening half. Still, his propensity to attack rather than distribute is a problem. There were numerous opportunities to shuttle the ball wide; Kalou, instead, opted to dribble into a crowd -- and lose possession.

Anelka 5
An odd, and frustrating, one. Looked pretty good early, but often was ineffective. Almost seemed disinterested throughout the second half. To be dropped for the second leg, if I had any say.

Drogba 8
Imperious first half. Quelled in the second, but not entirely his fault. Unlucky not to have scored with thunderous free kick from almost 30 yards.

Hilario 5
Receives an extra point on the belief that his kicks were intentional (riiiight).

MOTM
Ivanovic. Our player of the season? Quite possibly.