Share All sharing options for: CL Recap: Internazionale 2, Chelsea 1 (or not bad) 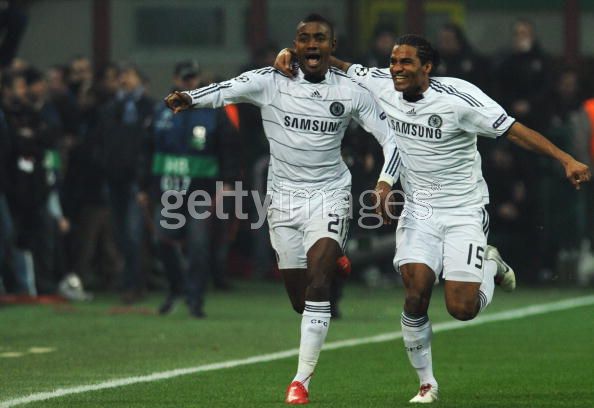 There are two distinct views one can take following the opening leg. One thing is certain, though, as a Chelsea supporter, you can't be too upset.

1. You're fairly pleased.
We were unlucky. Loads of possession, though not a great gauge of performance if you ask me (c. Arsenal). 18 shots to nine. We struck a post. We were denied a penalty. Yet we still emerged with an away goal.

Three real attacks from Inter, two goals -- the last of which likely would end up in the stands nine out of 10 times. An encouraging first-half display from the Blues, unpredictably followed by a second half highlighted by a Kalou goal but that, overall, was delude of ideas and incisiveness. Yet will still emerged with an away goal. This despite missing several key players and some (Lampard) obviously not fully fit. We can certainly do more, right?

Mourinho, following the second goal, attempted to kill off the tie, either out of confidence or fear. It was an ineffective strategy nonetheless. Balotelli was introduced; so, too, were Pandev and Muntari. All positive substitutions, all produced absolutely naught. If I were Mourinho, I'd be angry my side was unable to get a third.

It can't only get better at Stamford Bridge, say ye. Hard to argue.

2. You're disappointed.
You either prescribe to the notion that our performance warranted at least a draw. Or you're of the mind that we struggled to break down a dead tired Inter Milan, days after clawing its way to a draw with nine men.

Maybe perhaps you were underwhelmed with the little we had to show for our superiority. Even with Inter, at home, retreating in their own backyard, we still could not create any clear-cut scoring chances (aside from Lampard's scuff midway through the second half). The final third was a mess for the most part. Reverting to pot shots is not going to get it done. It's somewhat worrisome.

Still, though, you're well aware we're in a solid position heading back to Stamford Bridge. 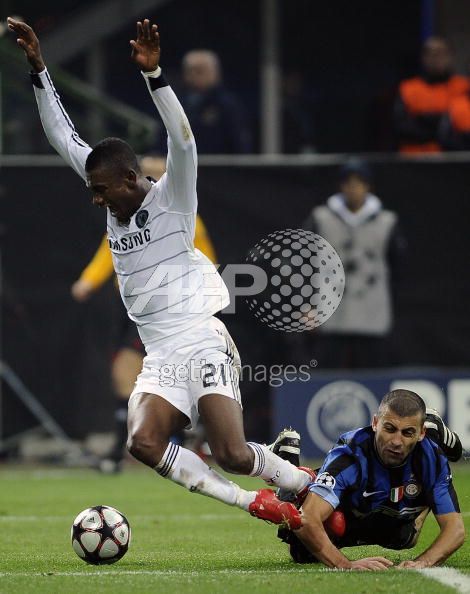 The (pseudo) Penalty
I know, there will no doubt be a handful of intellectuals strolling into this blog to continue that age old tradition of telling us to stop f****** complaining. Whatever. It WAS a penalty, and it WASN'T called. It's a massive talking point.

Moving on. What is it with Chelsea, officiating and European competition? On with the quotes.

"We were a bit lucky," Mourinho told Sky Sports regarding the penalty, "but Kalou was clever. He dived at the right moment. Normally it's a penalty. The referee looked over to the linesman and the linesman told him no."

"I think it was a penalty in the first half," Ancelotti said, "but a penalty is when the referee blows the whistle. We can say that we were unlucky this evening and we hope it will be better in the future. González is a very good referee with a lot of experience. Inter are a little bit less predictable than they were last year but, looking at what happened tonight, I believe we have quite a lot of chances to go through."

Even Walter Samuel, the offender, admitted fault: "I am honest, Italy won't change me. It was a penalty. Overall, I like the referee." I'm sure you do.

To Kalou or not to Kalou
What to do with Kalou? You could view his performance Wednesday, like the opening leg, in two ways.

Either he was bright -- he did provide a crucial tally now, didn't he? Or, of course, he was poor considering the amount of space and possession Mourinho allowed him. A coincidence? I think not.

As for me, I felt he was relatively useful. You know, you just have realize what you're getting with the Ivorian. Accept that the kid has a pretty good footballing mind; his positioning and ability to restrict himself to a role are great. But, with that in mind, you also have to accept the fact that Kalou simply does not have the skill to execute. Take note the numerous times on Wednesday in which he opted to attack defenders -- and thus lose possession -- rather than for the available Malouda and, more importantly, sorely-needed width.

There's a reason Kalou usually is much more effective as a substitute.

Attacking surplus
We don't have it. Sturridge, Kalou, Joe Cole. Or Pandev, Balotelli, Quaresma, even Muntari. Not really a tough decision, eh?

More analysis to come. Player ratings are on the way.