Share All sharing options for: The 100-word recap: Chelsea 2, Burnley 1

Can I keep such a grand, and anticipated, recap under a century? We soon shall see. The opening third-party piece, which I love, does no count, mind you.

"Say what you like about John Terry, and this weekend most people have ("this vile and gutless man" - News of the World), he remains an outstanding centre-half, with nerves of ice. Perhaps he even enjoys living dangerously in his professional as well as personal life."
-Steve Tongue, The Independent

Paul Wilson (The Guardian) had the nerve to say what many of us were probably thinking minutes after Saturday's 2-1 win over Burnley at Turf Moor had drawn to a close. “Sometimes it is impossible to believe these things are not scripted.”

Indeed. John Terry's headed goal, eight minutes from time, not only secured a precious three points in what looks likely to be an intensely-contested Premier League title race – it, if only for a few hours, also shaded the Chelsea captain from the malign, but warranted, scrutiny that has blanketed England's Brave (for how much longer remains to be seen) since his latest foray into boneheadness. 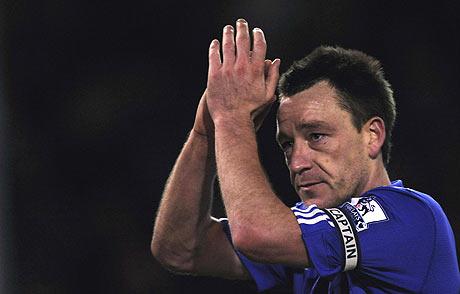 Terry, like Austin Powers before him, also likes to live dangerously.

The match itself was hardly a spectacle. It was a chore, a grind. The display was, in effect, of a certain Mourinho quality – against competition that, on this evidence, has every chance to be a Premier League team at this time next season. However, the fact remains: five consecutive wins, 19 goals since our foursome of Africans departed. What more can you ask?

As you can see, Terry's defensive work, underappreciated on the day, was nearly perfect.