Share All sharing options for: Caption This! Ovrebo bolloxes another one...

I couldn't have been the only one who tuned in to tonight's Champions League first leg between Bayern Munich and Fiorentina just to see how referee Tom Henning Ovrebo got on. Right?

The man certainly didn't disappoint -- at least he didn't disappoint the Bayern support. He, along with a precarious linesman, who was also on the sideline at Stamford Bridge last may, cost the Viola a precious point in Germany. It was appalling stuff. Again.

Highlighted below is one of the match's many talking points. This one features Chelsea old boy Arjen Robben, who was brilliant on the pitch -- and in the acting department -- and Fiorentina fullback Massimo Gobbi, who is on the receiving end of a red card from Mr. Henning. Have at it boys. 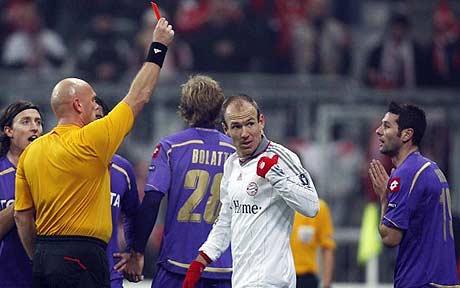