It was a win. Kinda.

Chelsea cruised into the last eight of the FA Cup on Saturday. Eventually. Three second-half goals turned what could've been a replay-destined borefest into a relaxing kickabout at Stamford bridge.

It took less than two minutes for the Blues to ease ahead, through the once-again imperious Didier Drogba. Why Carlo opted for the Ivorian I don't know, but I was relieved to see his name on the team sheet. He was a domineering force, tireless on both ends. His peach of a ball to Ballack for our second -- the pivotal moment of this tie -- was of another class. Without him, we may have found ourselves with another needless fixture to add to the list. 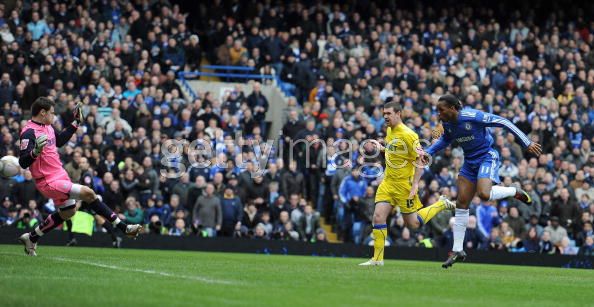 The opening half was a drag (has anyone used the term drag since the mid-1990s?). We were, for the most part, poop. Perhaps we went ahead too soon. Ballack proceeded to doze, our back four tensed up and Joe Cole, he just sucked. The man on a mission for a new contract did nothing to quiet recent criticism, seeing plenty of possession and doing absolutely nothing with it. Well, except hand it back to Cardiff. City, themselves in a bit of a pickle at the moment, took a page out of the Everton handbook: no frills, get after it blue-collarness. It worked, too. After two near misses from, you guessed it, set pieces, the visitors had a leveler through Championship superhero Michael Chopra. Zhirkov switched off; Alex had his pillow and blankie.

The second half was a much more controlled performance from the hosts. Carlo obviously broke out his Italian hairdryer. Joe Cole was relieved of his duties to start the half by Salomon Kalou; that helped. It also helped that our centerback pairing decided to grow a set. Both took their shots at the impressive Jay Bothroyd after the break -- finally.

Ballack's goal arrived, Sturridge soon followed and Kalou capped off an up-and-down day with a header of immense quality. John Obi Mikel, meanwhile, was superlative throughout. The 22-year-old Nigerian held us together for long patches of the first half. Just had to mention.

A note to Carlo
What the hell is with your substitution patterns? Florent Malouda for Daniel Sturridge? Surely Flo doesn't need to gain experience. You know who does, though? Borini, Matic, Bruma ... Only Borini found his way onto the pitch Saturday, for just five minutes. He didn't even touch the damn ball.

Furthermore, couldn't a youngster or two or three have actually started this match? I don't think Ballack or Carvalho would've taken offense to another day off; they need rest at their age. I just don't get it, especially after the Padawons got a look earlier in the season.

Player Ratings---
Hilarious 7
Generally good. A couple of solid stops.
Paolo 7.5
Efficient shift from the forgotten man.
Alex 6
Yikes. Was clueless during the opening 45. Not even a great second half -- which he did not have -- would have eased my view.
Ricky 6.5
Poor first half. Much more aggressive, and thus better, afterward.
Yuri Zhirkov 6
Not there defensively -- yet. Give him some time.
Obi-Wan Mikel 8
Excellent, I thought. Combined successful tackling, positional sense and solid passing -- at least the short ones. Set up Drogba's opener. Still struggles with distribution at times, but is looking great since returning from ACN.
Der Kaiser 6.5
Netted a fantastic goal. Didn't do much else.
Super Frank 7
Wasteful with his chances, but otherwise put in a worker's shift.
Joe Cole 4
Abysmal 45 from the man with a contract on his mind. Tried entirely too hard; gifted Cardiff possession on too many occasions to recall.
Sturridge 7
I like it. Improved positioning has resulted in better overall play from the young'n. Still wasteful in front of goal, but that will no doubt improve.
The Drogs 8.5
A wrecking ball of a performance. A finisher, and provider, in attack; mixed in some great industry.
Kalou 7
More positiveness from my archenemy. Capped a lively display with a brilliant headed goal.
Flo N/A
Borini N/A