"I don't think we should be frightened of anyone at the moment."
-Everton captain Phil Neville

Couldn't agree more, Phil. Goodison Park is next on the menu for our Blues, just three days after a taxing but supremely satisfying day at Stamford Bridge. Everton, as the less-unlikeable Neville has pointed out, are in quite the confident mood at the moment. Aside from a nightmarish derby at the weekend, the Toffees have been in resurgent form. This despite injuries fracturing what could be one of the Premier League's most talented, depth-laden outfits -- at least in my mind.

Backlash. That is exactly what Chelsea could be faced with following Everton's defeat in the Merseyside Derby. With a man advantage. Need more reason to worry? What about this season's previous meeting at the Bridge? You know, the one that served as a catalyst for our midseason drift into mediocrity? Set pieces. Gross. 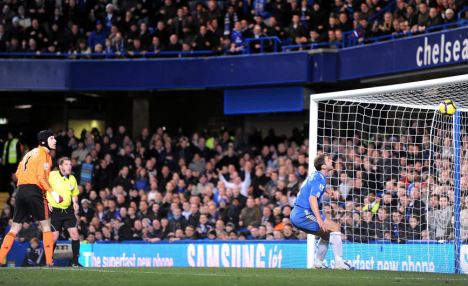 None of this. Please.

Do I sound negative? Sorry.

Good news: We haven't lost at Goodison in a decade. Yes, a decade (Nov. 2000). The last three meetings, however, have ended in a draw.

A win would solidify our hold on the Premier League. Coupled with a United draw/loss at Aston Villa -- certainly not inconceivable -- and we could be looking at a lovely, lovely week.

Team news: Specifically surrounding Everton. They will be without influential midfielder Steven Pienaar, who was sent off against Liverpool on the weekend.  Holding mid Marouane Fellaini, who was linked with Chelsea in the January transfer window,  is also unavailable via a swollen ankle.  Those, my friends, are heavy losses.

Michael Essien, Juliano Belletti and Jose Bosingwa are long-term misses for Chelsea. It also appears Deco will be sidelined with a knee problem.

Starting XI
Will Carlo rotate? You would expect so. Should he? Negative.

Cech
Ivanovic-Terry-Carvalho-A. Cole
Lampard-Mikel-Zhirkov
Anelka-Malouda
Drogba
Sidenote: Can we please see Sturridge on the bench, sans Kalou. I was disheartened to see Kalou-face leapfrogging Sturridge for the Arsenal match.