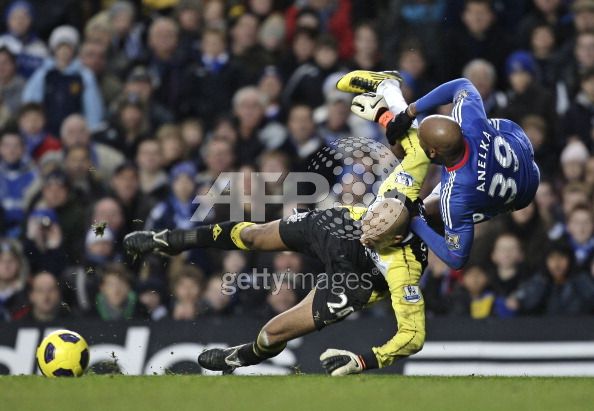 Just watched the match again. Catharsis, no. In fact, I believe my dissatisfaction was heightened during the revisit. That second half, well, it's not just poor, it's downright shameful. So much so that the display is worthy of an inquisition.

So much so that I would rather not scribble down a few abject sentences to describe it. Even though I already have.

The latest rundown then will feature 25 bullets of **** you need to know, 25 pieces of flair that I took away from Saturday's hiding at the Bridge.

The Rundown
• The result isn't necessarily bad. A draw with Everton, at the Bridge, is run of the mill stuff over recent seasons. The way it arrived, however, is the talking point.
• Hey, we played some good football in that first half - at least 40 minutes of the proper stuff.
• The above leads to another point about the age of this squad. Has anyone else noticed we seem to play well in phases. It's as if the age of some of our players is restricting their ability to put together a solid 90 minutes. Maybe I'm just looking for excuses, I don't know.
• Phil Neville is a bellend.
• What is it with Jose Bosingwa? The man is a shell of the player he was before the injury. Not only can he not defend, he's lost his ability to play a mean cross. Shame.
• Ancelotti isn't totally blameless. His demeanor certainly doesn't help in moments such as these.
• Furthermore, is King Carlo not sick of watching this dross? I mean, I know his options are limited but he has to have more tactical nous than this. Just sitting there as the same old tragedy plays out match after match isn't my definition of getting the job done.
• More Carlo. What was with this substitutions? I know the bench lacks impact players, but to go Paulo for Bosingwa makes no sense whatsoever.
• Ramires on for Anelka? When Anelka looked the most likely to grab a second? Explain.
• What does Sturridge have to do to get a start? Our front three is woefully out of form. Why not give the kid a chance; he has at least showed when brought on - for cameos - that he wants to play.
• No Josh? What did he do in training not to get a look during a second half in which we were calling out for someone to get on the ball and make an incisive play.
• Kalou.
• Yeah, ******* Kalou.
• There's this one moment, on 83 minutes, when Kalou picks up a pass on the right side of the penalty area following a great run from Essien. He's alone with Howard. Pick your spot, son. Never going to happen. Kalou does what he does, and instead opts to work the ball onto his right foot and dribble for a hot second so that Jagielka can make a recovering tackle. It's so bad you have to laugh.
• I never thought I would ever describe a Chelsea team, post-Mourinho, as scared. This team played scared in the second half.
• I'm still fuming over the lack of reaction not only to the leveler from Beckford, but also to the announcement of the amount of added time. SEVEN MINUTES. How can you not get up after hearing that? Unbelievable.
• We held on a for a point. At Stamford Bridge.
• Bane is a ******* hero. I wonder what he thinks of all this.
• What exactly does Emenalo do? Carlo clearly has nothing to say to the guy. Wreaks of another Roman spy.
• We've taken 30 points from 16 games. That's seven less than we had at this stage a year ago.
• Our next three fixtures are daunting to say the least: Spurs (A), United, Arsenal (A). On recent evidence, we would do well to grab three points from those three games. That leaves us at 33 points near the midway point of the season, on course for a point total in the 70s I'd say. Will that even be good enough for Champions League qualification?
• We've gone from the most impressive team in England, perhaps the world, to an also-ran - solely in terms of performance - in two months. Staggering.
• Want something positive? England's Brave John Terry made a solid return. ...
• ... And, hey, we didn't lose. If we had, there certainly couldn't have been any complaints.
• Oh, and Frank Lampard will be fit for Spurs. Then again, we've heard all that before.

Player Ratings
No point in breaking these down individually - at least for some - so I will proceed with lumping many of these underachievers together, of course by degree of shiteness.