The what: Premier League, Round 16 – Chelsea v. Everton
The where: Stamford bridge (41,841)
The when: 4 December, 3pm local time (10am EST)
The how: ESPN2 (DirecTV 209, Dish Network 144)
The why: Because we might just be on the cusp of collapse. And, with Manchester United's match with Blackpool postponed, we have a chance to return to the top of the league table. As King Carlo put it, this is our most important game of the season. 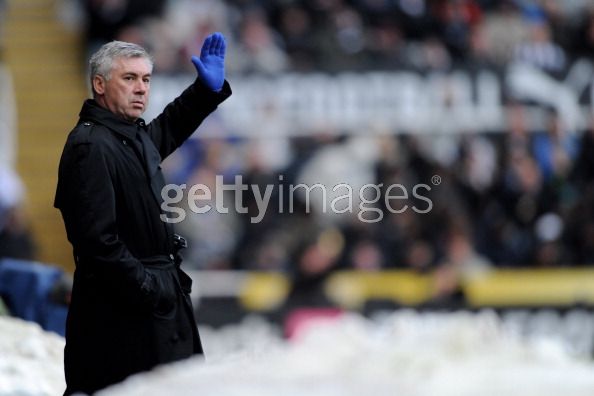 The referee: Lee Probert
The stat: Five of the last seven league games between these two clubs have ended in a draw. Everton have drawn four of their last five League away games, the last three in a row. I'm sensing a trend, a trend I don't care for.

You see, it's not exactly been gravy for the Blues over the past five seasons against David Moyes' men. Last year was just appalling - laughable concessions - and that last-minute leveler from Tim Cahill in 07-08 stung quite a bit. So, I think it's reasonable for me to expect much more from the famous CFC.

Expectations, however, are at a basement level at the moment. November could not have gone much worse. Four points out of a possible 15? That's an embarrassment for a club with this much talent, and such a grandiose reputation - at least performance-wise. Injuries may have played a role, instability too. But excuses those are not.

No better time to move on than now. Throw November to the side, as December will prove a much sterner test. No less than a win will do to start a run that includes Spurs, Arsenal and United. Keep the faith.

Toffees —
Position: 16 (16 points)
League Form: WDDLDL
Team: Howard, Mucha, Heitinga, Baines, Distin, Jagielka, Coleman, Neville, Fellaini, Cahill, Pienaar, Beckford, Yakubu, Saha, Anichebe, Rodwell, Bilyaletdinov, Baxter
Doubtful: Jagielka (ankle)
Injured: Hibbert (ankle), Osman (ankle), Barkley (leg)
Suspended: Arteta (1 of 3)
Leading scorer: Cahill 8
Quote: "We have had pretty good results there (Chelsea) in the past, and also sometimes when we have been up against it. Last year we had John Heitinga and Lucas Neill at centre half and it ended up 3-3. Then there was the year we lost the League Cup semi-final to them and then went there afterwards in the league. I remember thinking ‘this is going to be very difficult’ and we got a good draw. I think we have had some good results against them but it is one of the grounds you go to and you know it is going to be very tough for you." -David Moyes

This'll be Moyes' 400th game in charge of Everton. He's worked wonders for Merseyside's other team. Not this season, however.

The Toffees are languishing. That fully means they'll be exceptional Saturday.

CFC —
Position: 2 (29 points)
League Form: WLWLLD
Team: Cech, Turnbull, Ivanovic, Terry, Bruma, Bosingwa, Ferreira, Cole, Van Aanholt, Mikel, Ramires, McEachran, Zhirkov, Malouda, Kalou, Kakuta, Drogba, Anelka, Sturridge, Borini
Doubtful: Zhirkov (calf)
Injured: Alex (knee), Lampard (groin), Benayoun (achilles)
Suspended: None
Leading scorer: Malouda 7
Quote: "This moment is not easy, it is not finished and we have to come back to win, we have to come back to play good football and it is very important tomorrow to win, we want to look forward and it will be a very important period in the season and we need to change. Tomorrow will maybe be the most important game of the season." -Carlo Ancelotti

How right you are, Carlo.

Let's hope the boys understand that, and react accordingly. KTBFFH