Share All sharing options for: The Adventures of Seppie-the-Pooh 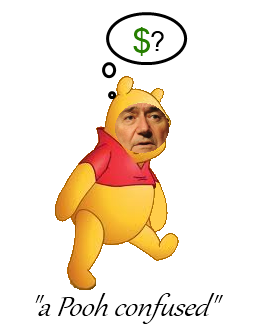 This is a story of quite a remarkable bear who lived in a magical place. His name was Seppie, but he was also called 'Pooh' for reasons that are lost to time. He was a very cute, cuddly little bear, and his home was in an old oak tree right in the middle of the Fantastic Imaginary Forest of Amazingness (FIFA for short). Now, Pooh was a lovely creature, without a care in the world and the best of friend to all who knew him. But he sometimes got into trouble. As a bear of very little brain, Seppie was prone to overindulgence, and the thing he most liked in the world was jars of money.

One afternoon, Pooh woke up with a very hungry feeling, and as he trundled over to his larder he realised that there was no more money to be found. This was clearly a problem for poor Seppie. The poor bear just didn't know what to do with himself.

Now, a Pooh is by nature not particularly cunning, but eventually Seppie got it into his head that he'd need to venture far and wide to find those life-sustaining money jars he so craved. And so it was that he waddled to his thick red door and peered out into the Fantastic Imaginary Forest. 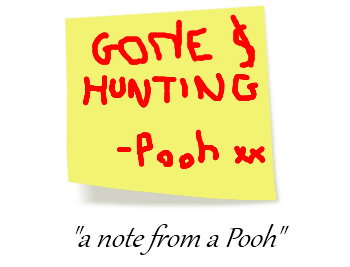 It was a lovely clear winter's day, and the crisp smells of the season wafted into Seepy's home. "Hmmm," said the bear, "it's a good day for walking!"

And so it was that Pooh set out, but not before leaving a note to any of his friends who might come calling and taking a brief nap - after all, it was a better day for napping than walking.

The trees were bare at this time of the year, and Seppie had little trouble making progress as he strode through the forest. It was a little cold, but the sun was shining and Seppie's fur made him comfortably warm on his expedition, and the little bear ambled along as happy as can be, for a little while at least.

If you've ever been a bear, you'd appreciate Pooh's predicament - it had been at least twenty minutes since a snack had been forthcoming. Worse, he'd been inadequately positioned, and he was nearly 200 yards from his front door. This was clearly not a situation friendly to bears, so Seppie opted to take a short nap to recharge. Perhaps food would be forthcoming when he awoke.

Instead, Pooh was stirred a few minutes later by a friendly (if rather gloomy) voice.

"Hullo Pooh," said a small grey donkey, waking the slumbering bear abruptly. Seppie was too startled to reply immediately, so the intruder carried on. "No, no. No need to say hullo back. I bet you don't even know who I am. Nobody ever thinks of poor William."

Seppie was not a rude bear and quickly made his apologies to his friend - Prince William the sad donkey and Seppie-the-Pooh had been well acquainted for years and of course Seppie hadn't forgotten who he was. As the beleaguered bear was sputtering pleas for forgiveness, William looked at him with doleful eyes. Pooh knew he was trapped, and sure enough...

"I wrote a poem," said William. "It's called 'I wish my life wasn't so miserable. By WyLym." His captive audience did his best to both listen and fight off impending depression, and it was to Seppie's huge relief that newcomers burst onto the scene shortly through the fourteenth verse. 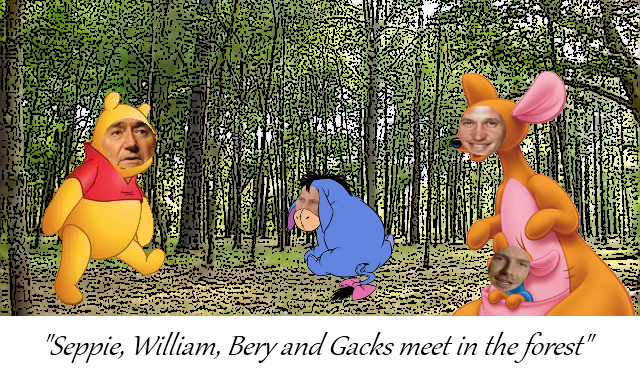 Bery and Gacks burst onto the scene, relieving Pooh of the immediate need to focus on William's woes.

"Pooh!" came a high pitched trill from little Gacks, "What are you doing out and about? I thought bears hibernated in the wintertime. Why aren't you sleeping?"

This was an awful lot of questions for poor Seppie to answer at once, but eventually he got across the message that he was running low on his money supply and had gone out to find more. Bery and Gacks said that they had no money to spare, but they'd do their best to help anyway by pointing Seppie in the right direction.

"Seppie, what you need to do is visit Mr. Tiggervich. He's got bags of money to spare and surely would be willing to give it to a fine bear such as yourself," said Bery helpfully. "He lives over beyond the forest, in the town with all of those people."

"I've no idea where to find Mr. Tiggervich, I'm afraid," exclaimed Pooh rather dejectedly (although his slight dejection was being put to shame by William's extended monologue). "I've never even seen the world outside of FIFA."

"Oh, never you worry. Someone will show you the way! I know little Andrei Piglett is in town all the time - why not ask him?" Piglett was, of course, Pooh's best friend, and Pooh wondered why he hadn't gone looking for him first of all. He thanked Bery, and gave little Gacks a pat on the head, and made his way towards Piglett's house on the edge of the forest.

"...and I still don't even know who my father is," said William, to a now empty forest. He didn't notice that his audience was missing as he was focused on a rock whose life seemed so much better than his own pitiful existence.

Much to Seppie's surprise, Andrei Piglett wasn't home. Instead, there was a note. "Gone. Shopping. In town," read Pooh carefully. Pooh knew that without Piglett, he stood no chance of meeting Mr. Tiggervich and getting his by-now well-earned jars of money. He'd never been to town before, and was a little nervous about being around so many people, but he decided that money was more important thank such things as risk, and ambled out of the forest, over the road, and towards the shops. There it was that he encountered his friend. 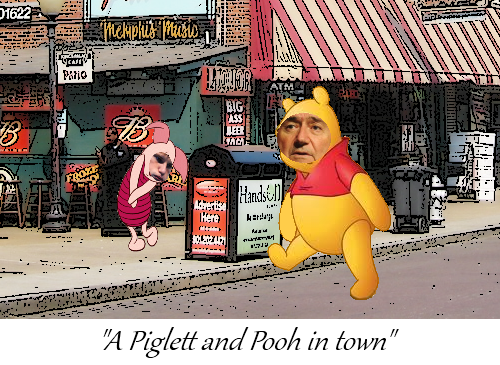 "Piglett! There you are! I've been looking for you," Pooh cried upon seeing his dear companion, who was inconspicuously trembling next to a mailbox.

"P-p-p-pooh! What are you d-d-doing here?" Piglett said, shaking ever-so-slightly less with a friend nearby. Pooh explained his predicament, at some length. Eventually he asked little Piglett if he might be so kind as to lead him to Mr. Tiggervich.

"W-well, Pooh, I d-d-do know where to find h-h-him. In fact, h-h-h-he wants to see me today," Piglett blurted out, even more nervously than usual.

"Splendid!" cried the bear, oblivious as usual. "Lead on, Piglett!"

"Bu-bu-bu-but I don't w-want to go, Pooh! I don't!" Piglett's clear anguish made Seppie realise something was wrong, so he looked down at his friend in some concern.

"Whyever not? I heard he's a wonderful person who has all the jars of money you could ever want! What could be bad about that?"

"Y-y-yes, but he's h-ha-having a party!" wailed Piglett, which slightly surprised Pooh as he vaguely assumed parties to be good things rather than the opposite. "A-a-and there will be w-w-w-w-w-w-girls there! I can't go!" Suddenly it all became clear - Andrei Piglett was of nervous disposition already, and there was nothing that terrified him more than women.

"Piglett!" Said Pooh in that stern voice that he rarely used. "Women aren't scary! In fact, they're one of the best things in all the world, behind... money, of course. And food. And sleep. And my eternal legacy."

"Sleep. But anyway, this is something you'll just have to get over. Be brave and bring me to the party! I'll share some of my money pots with you!" Piglett visibly deflated, something quite hard for such a little creature to do, before standing up tall again.

And so the friends went off to visit Mr. Tiggervich, after hurrying home to drop off Piglett's shopping. 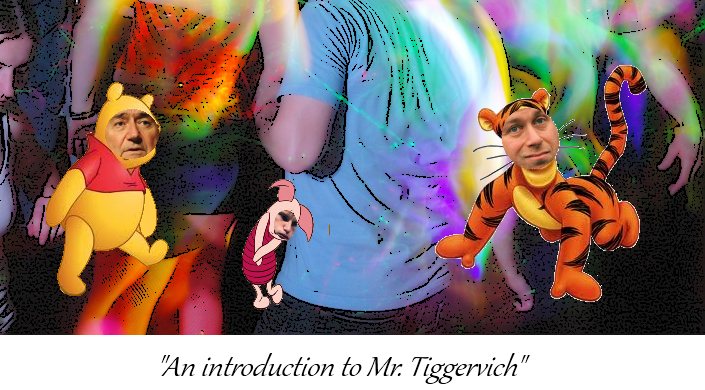 The famous Mr. Tiggervich was having his party in the United Club of Completely Legitimate Businesspeople, which was just a little way from the shops where Piglett and Pooh had encountered one another for the first time that day. There'd been so much rushing around that day that the sun was starting to sink as they hurried in.

The place was crowded, and Piglett immediately noticed that girls were out in in public. But he battled through his shock to make his way to the centre of the club, alongside Pooh. As they got nearer the middle, they heard a booming voice breaking out in song:

Pooh was trying to remember just what a 'roman' was (he had in mind shiny hats with crests, for some reason) when the song abruptly stopped, and a rather sprightly orange and black tiger bounced his way over towards them.

"Ahh! Friend Andrei! And another friend too," roared the exuberant voice - Mr. Tiggervich himself. "Who might you be, my rotund amigo?"

"AHA! Seppie! Our little friend here has said so much about you! Come, come, enjoy! Drinks! Company! Jars of money! I know your tastes, Mr. Pooh, and rest assured you can take as much as you like! You don't get to found the United Club of Completely Legitimate Businesspeople without being well-moneyed in totally legitimate money!" With that, Mr. Tiggervich grabbed Pooh by the hand and guided him towards a previously-unseen corner of the room, stacked high with jars of money, before bounding away back into the throngs of people to entertain little Piglett.

Pooh was lost in a happy dream, frolicking in Mr. Tiggervich's spacious money jars. Just as he was drifting off to a happy sleep, he received a short, sharp, shock, in the form of a sting on the nose. This is not the sort of thing one expects when face down in a jar or money, so his pained cry alerted Mr. Tiggervich that something was amiss. The host appeared in a flash.

"Comrade Seppie-Pooh! Whatever is the matter? Was the money not clean enough? It happens sometimes when it hasn't been adequately laundered." The tiger's face was the very picture of concern. "But oh, no! I see it is something else. Here, let me..."

Mr. Tiggervich reached down into the offending jar, and with a triumphant grin fished out the smallest giraffe in the world, who ten seconds prior had been the party responsible for a bite to one of Seppie's most sensitive regions.

"I had been looking for you, my baby. Come here and kiss papa." Seeing the bemused look on Pooh's face, Mr. Tiggervich shrugged. "What can I say? Opulence! I has it."

With that, Pooh decided it was time to go home, and with Piglett's help he hauled several jars of money back to his home in the forest. All was well for several months, until one day he was woken by a strange knocking at his door - and at the previously unknown hour of 9 AM. After several minutes of ignoring the noise to make it go away, Seppie relented, tripped his way downstairs, and opened the door.

In stepped a rather official looking man.

"Seppie-the-Pooh? Agent Jordan Hatcliffe, IRS. We're here to investigate the possible illegal transfer of several jars of illicitly-acquired money. Please cooperate with myself and my team," barked the stranger.

"Oh bother," was all a rather sleepy bear could manage in reply.