Share All sharing options for: What's gotten into Carlo lately?

Is the pressure finally getting to King Carlo? 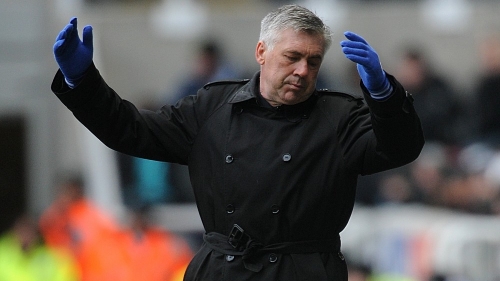 Mad as hell? Of course not. But our usually calm, understated leader has this week been in a very talkative mood. Even more unexpected? He's chosen the media as his outlet.

I. First there was the public rebuttal of England's Brave John Terry. Our captain admitted this week what many of us had lamented since the summer: that a lack of squad depth has, and will continue to be, a significant worry.

Terry said: "We've missed some key players at key times and it is a case of keeping everyone fit now over the Christmas period, where we have two games in three days. In the past, we had a big squad and could rotate and put other players in. We don't have that now we have quite a young squad and it's a time for everyone to stay together like we always will. Once we've turned that corner, we can move on from there and wait for other teams to slip up, which they will do."

No argument from me there. Ancelotti, however, disagrees.

"I think we had a problem because we had a lot of players injured all at the same time. For this reason, we had a bad moment. When you are not in a good moment, it's very difficult to put in the young players because you don't want to put responsibility on their shoulders. But now it's different. The squad is good, the players are in good condition, without injury, and we can play this game well. At our best."

This is hardly a big deal; it's not as if Carlo is lambasting Terry for making such a statement. Nevertheless, it is a public riposte. You have to admit, this is not something we've come to expect from Carlo.

II. Next on the menu, Carlo's feelings on Premier League scheduling.

The Italian has, at least until now, never been one to upset the establishment. You know, he's usually full of praise for the Premier League. Not exactly this time around.

Carlo took soft aim at the league for scheduling our match against Bolton only two days after the trip to the Arsenal. The man appears to be learning form the best in this regard - Sir Alex Ferguson.

Anceotti bemoaned: "I want to say something about the Bolton game because we won't have the possibility to recover. We'll have two days, compared to Bolton who, unfortunately, play on the 26th. We play on the 27th. That's not a good thing, to have one day less to recover."

Is Ancelotti angry? "Yes. I'm not happy about that."

Thoughts: Me, I'm pleased to see the Italian showing a little emotion. Of course we don't know what goes on behind the scenes - hell, Carlo might throw chairs and shit - but it's safe to say the club is lacking fire right now. Yes, Spurs was a step in the right direction, but more is required. A rebirth - of sorts - starts at the top.

Ancelotti's demeanor, I think we can agree, can work against him from time to time. The composed, cool temperament is wholly admirable, and has been effective, but there are times when the management position at Chelsea Football Club calls for some real passion. This club, particularly its core, is used to that approach (see Mourinho).

I think Ancelotti is beginning to realize that, here at the Bridge, the use of the vintage hair dryer treatment is needed every now and then - even if he's hardly reached Ferguson-level rants (yet). Good on him.