It's halfway through the season - and if I were writing about baseball, that would mean it's time for the All-Star Break. Since the Premier League doesn't have an All-Atar break, team, or even divisions from which to draw said teams, I get to make my own. So, here goes... 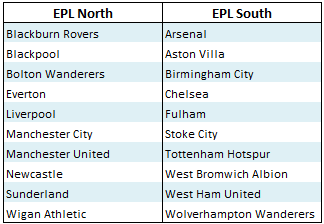 Sir Alex Ferguson manages the North, Carlo Ancelotti takes the South, with Ian Holloway and Roberto di Matteo as their assistants. Here's how the teams line up:

Seem crazy? I didn't go by actual ability, just based on how well each player had performed so far this season and how they'd slot in to the (slightly arbitrary) shapes I chose for each team. I also made a couple of unorthadox choices, because I can. I'm sure most of you will disagree with me on a lot of my selections, so feel free to shout at me in the comments. I'll give my thoughts on the team selection below.

There were some tough calls here in couple of positions - I chose a 4-4-1-1 to accommodate both Carlos Tevez and Andy Carroll, which meant I had to have a left winger and a fairly deep-lying central midfield playmaker to start alongside Chiek Tiote, who was the first name I put down. I considered Stuart Holden, Yaya Toure, and even Jordan Henderson here, but eventually ended up with Charlie Adam as a bit of a reward for how interesting Blackpool have been this season. The rest of the midfield was pretty straightforward with David Silva on the left and Nani on the right.

Defence was only particularly difficult at right back. This is probably the weakest position in the entire Premier League, and it's even worse for the teams in the North. I ended up going with Glen Johnson here for lack of better options, but that's... not good. The central defensive partnership of Nemanja Vidic and Gary Cahill was a pretty obvious choice, as was using Patrice Evra as the left back. Pepe Reina sits in goal, just edging out Joe Hart.

Carlo Ancelotti likes the 4-3-3 and so do I, especially as it fits the South's better players so well. Gareth Bale and Samir Nasri are unleashed as the left and right forwards here, flanking Marouane Chamakh, who was just about the best of the (healthy and on form) strikers I could find in the southern team. I nearly played Peter Odemwingie here, which would have been a mildly depressing selection.

Midfield was interesting. There are a number of qualified candidates here, and picking three out of Rafael van der Vaart, Luka Modric, Jack Wilshere, John Obi Mikel, Rory Delap (yes, I love Rory Delap because he's amazing) and Michael Essien was tough. In the end I went with van der Vaart ahead of the tried and true due of Essien and Mikel. Chelsea bias at work?

The back line puts Ashley Cole next to John Terry, who's had a remarkable resurgence of form lately. Alongside Terry is Brede Hangeland, whose inclusion shows that I think the South is pretty weak in the centre of defence. Bacary Sagna fills out the back four, but I would probably make him shave his head. Oh, and Petr Cech starts in goal. Yeah, I'm thinking there's some Chelsea bias.

What are y'all's thoughts?