Share All sharing options for: The Phil Jones conundrum

Carlo likes the look of a cat named Phil Jones. The same Phil Jones who is likely out for the season. 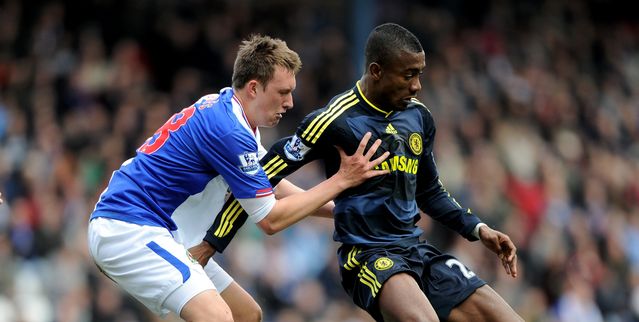 Soon to be joining the CFC?

Chelsea were first linked with Blackburn defender Phil Jones eight or so months ago. That speculation has heightened in recent times, with the club suffering a defensive crisis of sorts and the 18-year-old Jones becoming something of a phenom this season under former Rovers manager Sam Allardyce.

Ancelotti, last month, spoke glowingly of the versatile Jones. From the Fulham Chronicle:

"Jones can have a very good future in English football. He is one of the best defenders of his age and one of the best in England. He will have to work hard but I believe he has the ability to arrive at the same level as John Terry."

Allardyce is of course now gone, shunned to the curb by a grossly impatient - and grossly ignorant - band of outsiders. Now would be an ideal time to make a move for the versatile Jones then, right?

Jone went down with a serious knee injury in Saturday's 1-1 draw with West Ham. It's suspected that Jones suffered ligament damage, something that could potentially end his season. A tremendous blow to Rovers, no doubt.

How Chelsea responds is anyone's guess. If the club is in fact interested in pursuing Jones in January, this news may very well quell any potential move. I can understand such reasoning, with the club likely needing someone who could do a job immediately - especially if Terry and Alex continue to struggle.

There's also the likeliness that any deal in January would come at an inflated price, despite the injury. Lest we forget, this kid is only 18 years old. Eighteen. Stifling. And then there's the simple fact that it's January, and prices are always higher in the mid-term window.

But, for me, that should not be a deterrent. There is more value in the idea of tying up Jones now rather than later. The kid is already attracting attention from many a top club. And for good reason. What if we wait, a bidding war ensues, and we lose out on yet another top young English talent (see Adam Johnson, among others). If we do indeed have money to spend, sign the lad up. I see no reason why we can't afford to bring him in, and then reap the benefits in 5-6 months time.

It'll be interesting to see how the club decides to proceed.

What would you do?