Sunday's showcase postponed. But why?

Share All sharing options for: Sunday's showcase postponed. But why? 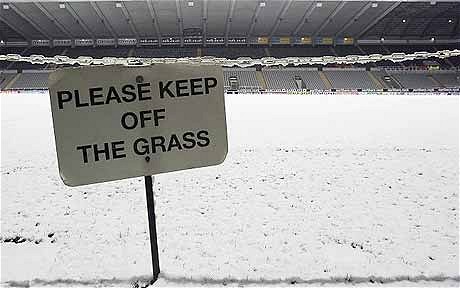 Manchester United's visit to Stamford Bridge has been postponed to a date yet to be determined. Chelsea suits called the game off more than 24 hours before it was to be played, "following consultation with the Police and the local authority."

Snow has decimated this week's Premier League calendar, with only two games - both on Saturday - actually taking place. All three of Sunday's matches have been postponed.

The good news? Super Frank gets another few days of precious recovery time. The bad news? We miss out on catching a massive fixture this weekend.

You know, I accept it's pretty bad out there, but I have to question why our match has been called off. We played at Newcastle two weeks ago in conditions described as worse than this current wave of cold. Certainly travelling must be considered, but to scratch a match a whole day prior to it being played? That's a bit odd.

Whatever. Nothing we can do now, except wait for the new date - which is the real question that needs to be asked.

Prepare for a fixture pile-up, people.