Share All sharing options for: Tevez to Chelsea? We're 'avin' a laugh

Any Chelsea supporter expecting the club to make a move for Carlo Tevez might want to rethink the idea. 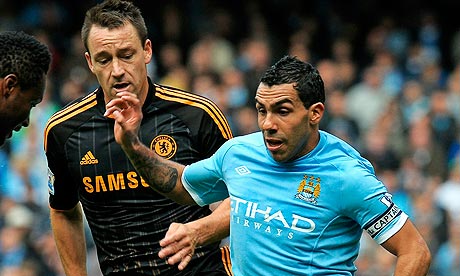 So the current Manchester City striker, formerly of Manchester United, has formally handed in a transfer request. It was promptly rejected. Nevertheless, it's unlikely Tevez will be hanging around Eastlands beyond January - unless all he's after is a pay bump.

A scenario that's not out of the question considering Kia Joorabchian is involved.

Still, if Tevez does in fact want away from City - which he recent statements suggest - and is not seeking a move back to Argentina, then one would think Chelsea would be among the most attractive destinations. Sounds like a good move, right? A proven Premier League striker whose skill and industry would be a benefit to any club in the world? Yes please.

But, who are we kidding, Carlitos isn't coming to Chelsea.

1. Why on earth would City sell to a league rival?

2. Transfer fee. We're talking in excess of £30 million. Anyone seriously believe the club would be willing to shell out that much in the January window? Perhaps the summer, but not mid-season.

3. Tevez is rumored to be on a salary of around £280,000 per week. Ridiculous. There is no way in hell Roman is going to sanction that kind of contract. And nor should he. Remember, Abramovich only recently reworked the salary structure at the club, for excellent reasons.

4. Tevez, though supremely talented, appears to be an extremely volatile individual. He's shown visible displeasure with both Manchester Clubs. He has had no problem engaging in public spouts with both Manchester managers, Ferguson and Mancini. He's got into it with our captain on more than one occasion. (Who hasn't?) Are we willing to take a chance - and splash significant cash - on another ego, one that could not only potentially rattle an already fragile locker room, but could also leave the club in less than two years time? I think not.

Just some thoughts. Personally, I wouldn't mind see the Argentine alongside The Mighty One. Fairly potent that frontline. I'm just not sold that the club see Tevez as a viable option. What do you guys think?