What would you do? Your team, your system at White Hart Lane

Share All sharing options for: What would you do? Your team, your system at White Hart Lane

How would you muzzle the wunderkind? 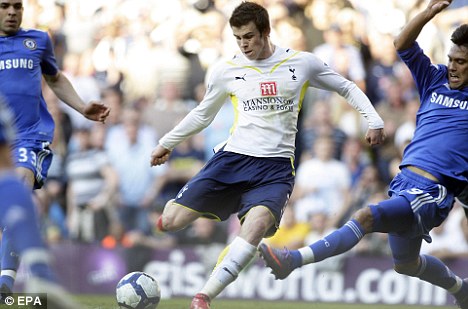 Many have begun to question the tactical nous of King Carlo in the wake of this nauseating run in which we are currently mired. Where's the Plan B, some say - a question even myself has asked. Another would be: Why has a man with such a coaching pedigree yet to recognize that the way we are playing isn't working and thus needs reassessment? It's a logical query.

There are more, but you get the drift. So, with that being said, how would you, if you could, change it? More to the point, what would you do this weekend to give the famous CFC its best chance to win?

So, summon your inner Mourinho and tell us what needs to be done. Let's hear them people. I'll go first.

Jack's proposition (aka the wrong one)
There are, in my view, two keys to Chelsea having a successful afternoon at WHL: 1. Slowing Gareth Bale; 2. Crowding the midfield. We failed spectacularly on both counts in our previous meeting with Spurs (April 2010). Frankly, this means a change in formation - something Carlo simply will not do; he pretty much said so in today's news conference. Whatever. The man needs to look at playing a more conservative game. We're not playing well, and, as such, need to make sure we are not conceding. Against a team such as Spurs, who are conceding regularly, would it hurt to sit back and see what happens? I mean, you have to think an opportunity - or three - are going to come our way regardless of how we set up.

That's why I would opt for a 4-2-3-1. Flood the midfield, apply pressure from the top and see how it plays out. Sure, we're not going to roll over opponents - sorry, Roman - but at least it will give us a chance to win.

Personnel-wise, Ferreira is the only logical choice at right fullback. Yes, he was absolutely embarrassed by Bale in April. So. Bale embarrassed arguably the world's greatest right-back (Maicon) a month ago. Ferreira wasn't fully fit the last time around, and, to be honest, while I'm not sold on him, I'd much rather play Paulo and have Bane alongside Terry than have Bane out on the right and Bruma in the middle. Do you want to see Crouch have a field day against the young Dutchman? I don't.

Let Mikel and Essien do what they do best in the holding roles. Drogba in the lone striker role, with Malouda, Anelka and Ramires behind him. Yes, I said Ramires. I said yesterday I thought the Brazilian would do well in a front three and I'm not changing my mind. Let him have the right side, and tell him to harass Bale at all costs. His supreme fitness would serve us well in quelling the Welshman's significant threat.

Even if Carlo goes 4-3-3 - a certainty - he could still keep with this lineup by dropping Malouda into the midfield three. Unfortunately, I see our best friend, Salomon Kalou, starting once again. Bah.