Share All sharing options for: Will Chelsea Leave Stamford Bridge?

The Twitterverse is abuzz with the story that Chelsea are considering relocation away from Stamford Bridge, their home for well over a century. The proposed site is currently occupied by Earls Court Exhibition Centre, but the buildings that make up the centre are expected to be demolished after they help host the 2012 London Olympics, which would leave ample room for a new, modern stadium. With UEFA's financial fair play laws coming into effect fairly shortly, Chelsea are going to have to look for new ways of increasing their profit, and the size of Stamford Bridge (the stadium can hold just 41,841 people, good for 7th in the Premier League) is a major obstacle in increasing matchday revenues.

So why Earls Court? As I've mentioned above, there's plenty of room to develop a major complex there, and Chelsea could afford some very cool facilities. They'd also be looking at increasing their capacilty by at least 50% , something that would be extremely tempting for the ownership and would be of significant help in the long run. The exhibition centre is also within a few blocks of Stamford Bridge, meaning that Chelsea wouldn't have to leave the immediate area, another massive plus. I mean seriously, it's really close: 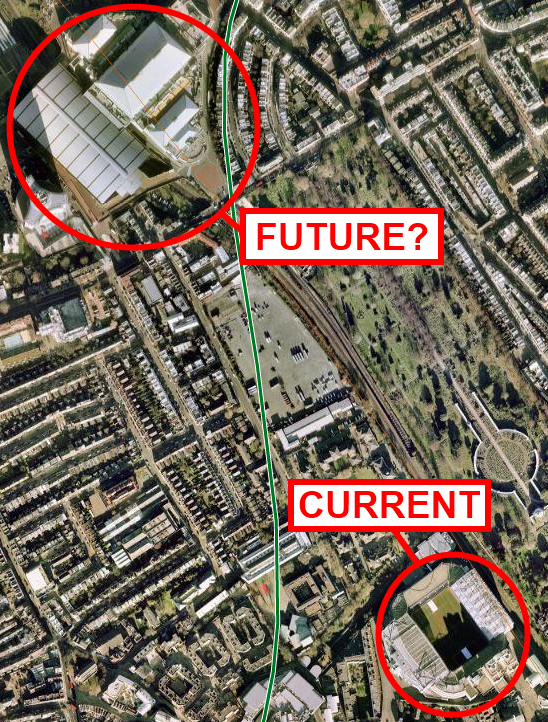 Of course, not everyone would be thrilled with a move away from the only home Chelsea Football Club have ever known. It's not just fans who'd be upset with a relocation, either - the reason the Blues are having to talk seriously about this now is that there are... well, other plans for Earls Court. From the linked article:

"Our vision for Earls Court is for a world class residential-led development delivering thousands of new homes and jobs, and creating a remarkable new place in London."

In other words, if Chelsea don't buy the land and build a stadium there very soon, they're not going to be able to, ever - which is a problem if the team wants to expand, because there are very few viable areas nearby in which to do so. The source who leaked the news that ownership was in talks to acquire the land agrees:

"From Chelsea's point of view this is their last opportunity to get a new ground and stay in the same area they have been in for over a century."

I can totally understand that supporters might be miffed at the proposition of ditching the Bridge for new pastures. Chelsea's higher ups will have to figure out if the gain in long-term position from moving would out-weigh the cost of leaving the Bridge. I'd lean towards it being a net benefit to the club, myself, but this is obviously a shades of grey argument. Many are citing transportation issues (we already have those, though), and doubts over whether Chelsea could actually bring in 60,000 fans regularly, an argument I suspect is entirely based on prejudice against the fans. What do y'all think?