Tableau is being upgraded so it's back to the old-style formation charts for a couple of days... there'll be shiny new toys when the new version comes out though, so no worries.

Chelsea played their usual 4-3-3 shape but had to do some juggling to accommodate the fact that they were missing Michael Essien and Didier Drogba (along with long-term absentee Frank Lampard). Yuri Zhirkov, who has been a fixture in the side since the second half of the 0-0 draw at Aston Villa, started alongside Ramires and in front of John Obi Mikel. None of the midfielders had their best games, with Zhirkov drifting too far out of position, Mikel misplacing a few passes early on, and Ramires being dire throughout. Liverpool played a 4-4-1-1, with Dirk Kuyt drifting deep and acting almost as a spare attacking midfielder. 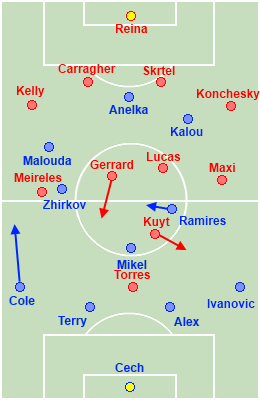 Although Ramires played extremely poorly, his performance would have been shielded had Zhirkov attempted to hold the middle rather than drifting off to the sides. The Russian's habit of moving left is extremely useful when Chelsea are in the ascendancy and need to create an opening to press home the attack, but it considerably weakens the midfield. Normally this isn't a problem with Michael Essien playing, as he's more than capable of shouldering heavy loads, but leaving Ramires on his own to face Steven Gerrard and Lucas led to Liverpool dominating that area of the field.

John Obi Mikel had been tasked to stop Gerrard, a tactic widely discussed prior to the match, and one that turned out to be easily foiled by Liverpool. Instead of playing his captain as a support striker, Hodgson instead fielded Dirk Kuyt in that role and dropped Gerrard back much deeper. Mikel was therefore unable to do much about the home team's most dangerous threat, and Gerrard could run rampant against the weak defensive efforts of Zhirkov and Ramires. Interestingly, it also meant that Kuyt wasn't actually picked up very often, since he's very fond of drifting to one side of the pitch and Mikel doesn't like chasing too far towards a touchline. The space Kuyt regularly found himself in led directly to the first goal. I've zoomed in on the area in question below: 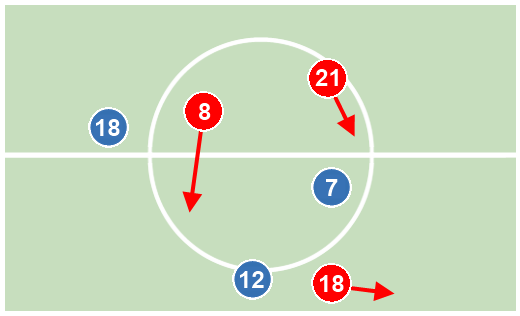 On the attack, things weren't much better. Ramires is known for his ability to drive forward, but he wasn't particularly inclined to do to today, and the passing from both him and Mikel was very poor. Zhirkov played reasonably well on the ball, but the left flank was not where Chelsea needed help going forward. Nicolas Anelka and Florent Malouda were regularly checking back in order to open up more options for their midfielders, but they then had no passing options themselves, which was a problem first encountered in the away game against Wigan Athletic. In fact, Malouda was playing so deep that it was entirely possible to describe the team's formation as a very lopsided 4-4-2! The shape was collapsing in on itself and offering very little means of effectively attacking Liverpool.

Chelsea lost the midfield battle, and they lost it because of a combination of poor play, injuries, and positioning. It would have been a very different story with either Essien or Lampard fit, as Lampard would have provided much more support in the centre than Zhirkov, thus attenuating the threat posed by Gerrard, and Essien would have had a much better time of things against Lucas both in and out of possession. The 4-1-2-3 requires at least one of the advanced midfielders to act as an effective conduit to a central forward, and Chelsea simply didn't have anyone for the job yesterday. Fernando Torres will get most of the acclaim for his two excellent goals, but Kuyt, Lucas, and Gerrard were just as influential in Liverpool's first half dominance.

A few other notes: