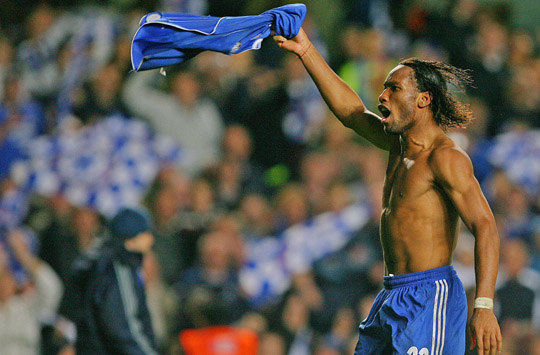 Yeah, it's that time again.

The Video (bonus): I usually reserve the moving pictures for match recaps, but I simply cannot resist. The above photograph of our Mighty One reminded me of a nice little bit of nastiness from a man named Petey. Yes, Petey.

The referee: Howard Webb
The stat: Didier Drogba has netted five in his last five starts in all competitions against the scum. Pillager.
The stat dos: There have been 24 goals scored in the last seven matches between these two sides. Atomic.

Chelsea. Liverpool. Anfield. It really does not get much better than this now does it?

Well, I take that back. A two-goal win, highlighted by a lovely gift from Stevie, would represent good value for being as good as it gets on Merseyside. The much-welcomed events of 2 May are unlikely to repeat themselves, however. Liverpool have won three consecutive matches for the first time in a century. Crippled they are no more.

Chelsea, meanwhile, are doing what champions do. Recent treading has been anything but simple, anything but scintillating. Nevertheless, the results continue to flow - 10 points out of 12 in October is a rather cozy return for a side not exactly firing on all cylinders. Hark back all of three days to our 4-1 coast against Spartak in midweek Champions League play; that was as frustrating slash cool - never thought I'd be slashing those two words in a sentence - a display as one could witness. I believe it's safe to say plenty was left in reserve for Sunday.

Anfield is always a scary prospect. Welcoming the Blues to town, though? A far more fear-inducing reality these days, I think.

BoSox —
Position: 16 (12 points)
League Form: WWLLDL
Projected XI: Reina, Carragher, Kyrgiakos, Skrtel, Johnson, Rodriguez, Lucas, Gerrard, Meireles, Ngog, Torres
Reserves (from): Jones, Kuyt, Jovanovic, Johnson, Poulsen, Aurélio, Kelly, Pacheco, Babel, Wilson, Spearing, Shelvey, Hansen
Doubtful: Ngog (shin), Babel (ribs)
Injured: Cole (hamstring), Agger (calf)
Suspended: None
Leading scorer: Gerrard 7
Quote: "It may not be long before they have a bad spell and you're asking what's gone wrong with Chelsea. If, after 38 games, you ask me what is it that made Chelsea champions, I might be more interested in answering the question, but not after 10." -Roy boy

El Nino will feature. Bah. Joey Cole, meanwhile, will not be available against his former club after doing something or other to his hamstring against Bolton last weekend. So sad.

So, will Roy boy break out the expansive tactics? Or shall we expect vintage hum-drum stuff from the master tactician. I guess we'll have to wait and see. Me, I am on the edge of my seat. 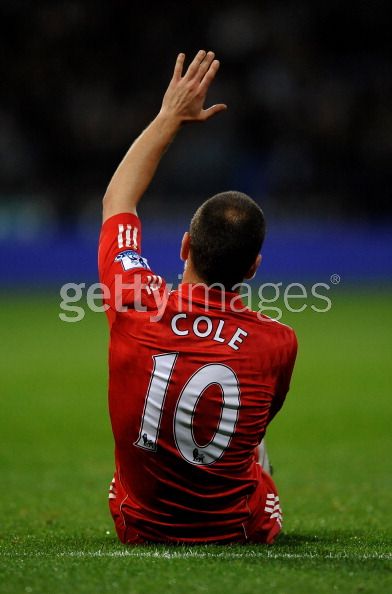 CFC —
Position: 1 (25 points)
League Form: WWDWLW
Reserves (from): Turnbull, Hilário, Bosingwa, Ferreira, Van Aanholt, Bruma, Ramires, Kalou, McEachran, Kakuta, Sturridge, Mellis, Borini
Doubtful: Malouda (ankle), Essien (toe), Bosingwa (illness)
Injured: Lampard (groin), Benayoun (Achilles)
Suspended: None
Leading scorer: Malouda 7
Quote: "No doubt they will pick up. Hopefully it's later rather than sooner because Anfield is always a tough place to go to get any result, but we're confident that we're playing well at the moment, and wherever we go and whoever we're playing against, we are confident of winning, and we have to take the game to them." -England's Brave and Loyal John Terry

The XI is concrete, sans Flo and Bison. Both are struggling with their respective knocks. Kalou and Ramires are on stand-by if either/neither is deemed fit. They better be, that's all I know.

Prediction: I never do this. But, today, I will.

Two for us. Nada for them. Drogba. Yuri. Watch this space.