Poll: Ray's out. Who's our next assistant manager?

Share All sharing options for: Poll: Ray's out. Who's our next assistant manager?

The shock departure of Butch. What on earth? 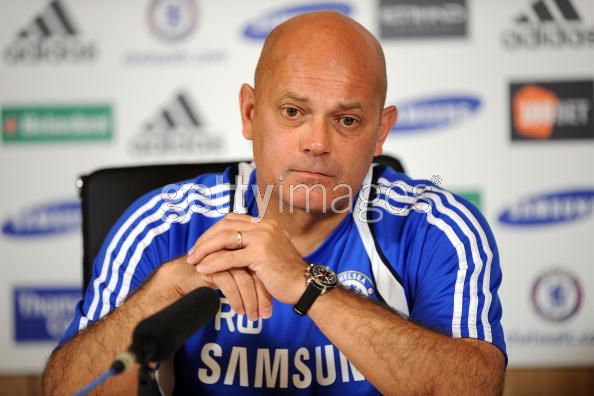 Reaction
I'm not sure what to say. This really is a stunning development. Bemusing.

For those unaware, Ray Wilkins was relieved from his assistant manager position with immediate effect this afternoon. He was, effectively, sacked. Why? We haven't a clue.

The club - well chief executive Ron Gourlay - informed Wilkins of the decision while the former Chelsea captain was taking in the reserves' 4-0 win over Bayern Munich with Carlo Ancelotti. Not exactly the most professional of acts. Neither was the club's handling of the news. A terse two-graph article on the departure graced the front page of the website.

It reads: "Chelsea Football Club chief executive Ron Gourlay has announced today that the board has decided not to renew Ray Wilkins' contract. This will take effect immediately. Gourlay said: 'On behalf of everyone at the club I would like to thank Ray for everything he has done for Chelsea Football Club. We all wish him well for the future.'"

So this is how you treat a man with a 37-year off-and-on association with Chelsea? Something, as they say, is not stirring the Kool-Aid.

What then could be the catalyst for Wilkins' sudden removal? The rumour mill has, of course, already taken this on in grandiose style. Here are the choice cuts, ranging from plausible to just plain ridiculous: 1. Wilkins had outlived his usefulness to the club; 2. A rift had formed between Carlo and Ray as early as last March, when we were promptly ousted from the Champions League by Jose's Internazionale; 3. He'd been reported for criticising the value of a recent signing; 4. Roman was growing increasingly jealous of Wilkins' closeness with the players; 5. Wilkins provided information on the club (tactics I would presume) to Mark Hughes prior to the Fulham match.

Weird. I can understand the club viewing Wilkins as replaceable. What I certainly cannot understand is why the club felt a move was necessary now. And to carry it out in such a discourteous manner? It all lends credit to the rumour of a rift within the management.

You don't remove a respected member of the club - somewhat destabilizing it in the process - simply because said member is viewed as expendable. You just dont. As if the club needs more on its plate at the moment, what with injuries already mounting and a noticeable drop in form looming.

Answers are needed. And I'm not sure we'll ever receive them.

Replacement
Though Wilkins' departure is a sad one, the club will move on. Soon.

Names have already begun to be linked with the now vacant position. Among them Paul Clement, Gianfranco Zola, Steve Clarke, Gus Poyet, Paolo Maldini and Filippo Galli. All come with solid credentials.

Clement is an internal prospect. He worked as assistant first-team coach under Wilkins, and is regarded very highly by the Chelsea heirarchy. I refuse to believe he is a serious contender for this posistion, however; the club is likely actively seeking a major name to sit alongside Ancelotti.

The rest of those being mentioned fit such criteria. Zola is a Chelsea legend. He has Premier League coaching experience (West Ham, 2008-10), and speaks both English and Italian. Clarke is also well-respected at the club, playing first for Chelsea then holding a key role under Jose Mourinho before moving to West Ham to join Zola's staff. Galli was one of Ancelotti's trusted assistants at Milan. Maldini, meanwhile, needs no introduction. He has already twice turned down a position at Chelsea.

Who do you like? Who do you want? It's a tough call. Personally, I would love to see Clarke return to the Bridge. He had an unrivaled repoire with the players while he was here and there's no reason to suggest that has changed. I highly doubt that Roman would sanction such a move, however.

Regardless of who comes in, it's sure to be an interesting new couple of weeks. Stay tuned.