Poll: Should Chelsea renew their interest in Neymar?

Share All sharing options for: Poll: Should Chelsea renew their interest in Neymar?

Not this kid again. Shit. 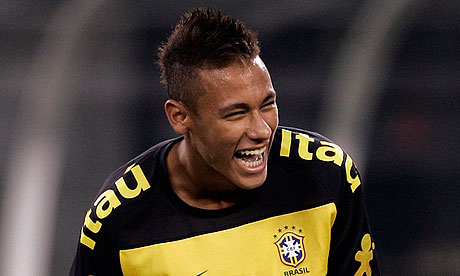 News linking Neymar with Chelsea has unfortunately surfaced once again. As if we weren't put through the ringer by this talent- and tantrum-heavy teen in the summer. This week, the Santos forward was quoted in The Sun, always reliable, with some favorable words for his former suitors.

First there was this, from the indelible Shaun Custis:

To play for Chelsea would be an honour. Everything they have to offer is attractive to me. They have big players, they are in big competitions, they have a strong squad and I like the way they play. Top players want to be part of something like that. I'm no different.

But I'm happy at Santos. If I left it wouldn't be because Santos isn't a good place to be but only because the Premier League is a higher level. It wasn't the right time for me to go in the summer but I will be much better prepared for it by next year.

Then Custis hit us with these:

A player with a winning mentality like I have has to play in the best places like Chelsea. Santos is my club. I love it. But it is not at as high a level as the English Premier League. I want to go where I can become a world-class player. I have ambitions to be the best player in the world. But more than that, I want to play in the top tournaments and if I do well and I deserve to be voted the best, then that will be fantastic. I watch Premier League football all the time, whenever I get the chance, and I enjoy the speed of the game and that it is so straight-forward and direct. That is something which really appeals to me.

Chelsea have some fantastic players like Didier Drogba and Frank Lampard and I would love to play with them. I don't know where I would fit in because that would be up to the coach. But I can play however they want me to. I'm confident in any position.

Santos president Luis Alvaro Ribeiro was quick to deny the quotage, insisting that most of it was said before Neymar agreed to a new contract with Santos. Whatever.

Whether the above ish is true or no matters not. The real question is, do we even want to pursue this kid anymore?

His rapport hasn't exactly soared since the summer soap opera. Neymar first threw a vintage fit in mid-September when he was denied penalty-taking responsibilities in a game against Goianiense by then-Santos manager Dorival Junior. Yes, Junior was fired for his role in unsettling the young star. The coach was sacked after he refused to recall Neymar, who he fined for his PK outburst, for the Sao Paulo clasico against Corinthians.

I mean, we already have one elite player prone to tantrums when denied penalty opportunities. Would the club be able to handle dos?

Neymar was then dropped from the Brazil national team by manager Mano Menezes. And now there are prostitutes.

Yes. Prossies. According to Soccernet, Rio daily Lance claimed last week that security cameras at Santos' hotel captured Neymar and teammates with prostitutes after their 2-1 win over Gremio on August 26. Well done, kid.

Perhaps this sincere affection for women would endear Neymar to his new Stamford Bridge teammates? I kid.

Sure, there's no denying Neymar's talent. However, do we really want to take a chance on what looks to be such a volatile young'n? God forbid we end up with Adriano V2.0 on our books. Let me know your thoughts, people.