Share All sharing options for: Glory Goals: Morris & the trombone

I kind of despise international breaks. Something about sitting around waiting for injuries to decimate the season. I know, downer. Apologies.

Anyway. New series here at the CO. Glory Goals will - obviously - focus on some of the finest strikes in CFC history. 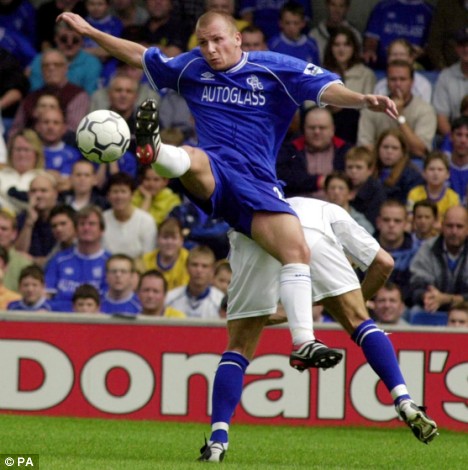 How do you begin such a immense series. With Jody Morris, of course. Yes, the former youth product turned legal nightmare made 124 appearances for the Blues, scoring five goals - none finer than the one we present today.

3 October 1999. The day when Manchester United's 29-game league unbeaten run came to a shocking end. Two goals from Gustvao Poyet, Chris Sutton's first for Chelsea, an own goal from Henning Berg - and then Morris. Five goals to none to the Chels.

This goal from Morris isn't anything special in particular. What it does, however, is cap one of the club's greatest-ever results. And, of course, there's the celebration. A celebration of such excessiveness it has now become the stuff of legend.