Liverpool's season gets even worse as they drop out of the top six for the first time all year. Meanwhile, Everton finally arrest their slide down the table with a win at St. Andrews that has repercussions elsewhere - Birmingham drop all the way down to 15th as a result of the loss. Stoke are big winners, jumping all the way to 10th. The middle of the table is so tight that getting a few points vaults you ahead of a whole bunch of teams. 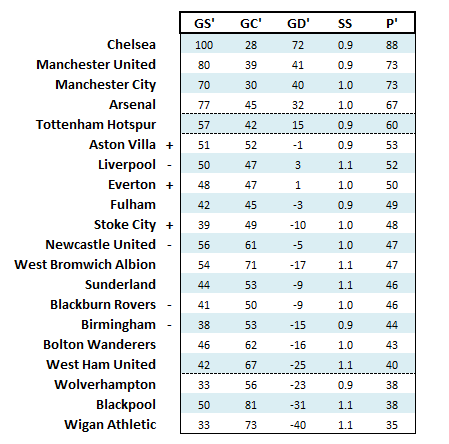 The above table is based on a Bayesian combination of my preseason projections and the current table with a strength of schedule adjustment. A little more more detail after the jump.

Up in the Champions League spots, Chelsea are well ahead of Manchester United and Manchester City. The fifteen point gap between the Blues and United is the same as between the 8th and 20th spots, which is crazy, especially compared to the difference between United and their cross-city rivals, which is just one point of goal differential. Let's just say that that one is too close to call.

Aston Villa are the beneficiaries of Liverpool's abject failure. Despite losing to Tottenham at White Hart Lane, they move up to sixth, ahead of the Reds and suddenly resurgent Everton. Four points separate Everton from Blackburn, with Fulham, Stoke, Newcastle, West Brom and Sunderland in between. Although Blackpool and Wigan both won their games last weekend, it wasn't enough to get either out of the relegation zone. Blackpool are getting pretty close, though.