Kevin Garnett, fine. Kobe Bryant, not so much. 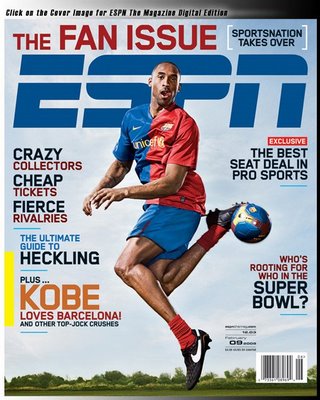 Don't get me wrong, I love Kobe Bryant - in strictly a basketball sense. Forget his off-court personal. The man is a paramount example of how to excel in a professional career.

Nevertheless, I can in no way cosign a Barcelona supporter invading the dressing room at Stamford Bridge. Not in the least.

Bryant and a host of his teammates from the NBA Champion Los Angeles Lakers were at the Bridge on Sunday for our usual win over the Arsenal. Bryant was among those Lakers who ventured below afterward to offer congratulations to the Blues. England's Brave John Terry seemed to be particularly interested in meeting the world's best on the hardwood (sorry Bron Bron). Perhaps knowledge was exchanged on how to handle media intrusion.

Reigning champions. How they do enjoy the company of each other. At least Kobe left that appalling FCB shirt on the West Coast.

The weirdness: Anyone else catch a glimpse of Clarence Seedorf in that early huddle with Mikel, Drogba and Flo? Sure, he and Carlo have a great rapport. But what is he doing in London a day after starting in Milan's 1-0 win over Parma?

Props to Footy Factor for the visual.