I apologise for the lack of content yesterday. I meant to get a goal-by-goal up, but after embarking on what seemed to be a fairly innocuous project, I quickly found it eating up all of my time on Sunday as well as a good chunk of this morning. Anyway, I'm happy to say that said project - a collection of interactive shooting heatmaps - is done and actually turned out to be really cool. Let's dive in after the break.

Want to see a map of Chelsea's left-footed shots against all opponents last season? Of course you do: 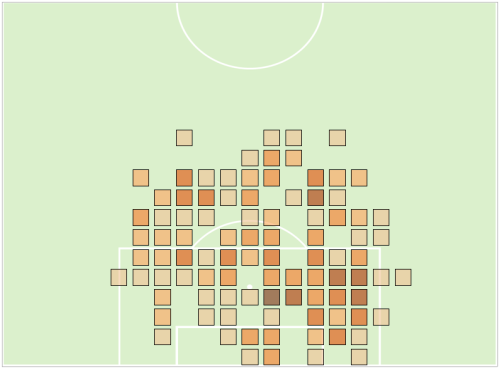 I've split up the playing field into 9'x9' zones and looked at each shot taken from a given zone. We can filter here by the result of the shot, the type of shot, and the attacking/defending teams, as well as by season. As mentioned above, this is a map of all of Chelsea's left-footed shots against all Premier League opposition in the 2009/10 season. The darkest shade represents six shots, the lightest one.

I think that's pretty cool, but we don't just want pictures. We want to be able to filter on the fly and drill down for the information. Fortunately we can put everything into Tableau Public and get an interactive visualisation out, and I've uploaded a page to let everyone play around with the data. So, here you go: Shooting Heatmaps.

The above image was just a screenshot of that tool, taken with the filters I talked about in place. Give it a spin and see what you can come up with. We've got more than just the heatmap on offer, however.

2. Shots on Target per Shot.

Wouldn't it be nice if we could look at a team's shooting habits and see not just where they're taking their shots from, but where they're taking their best shots? While blazing over the bar from 35 yards is all well and good, you have to get a shot on frame to score. Here we show a map of shots on target per shot for the entire 2007/08 season, with the size of the squares based on the total number of shots in a give zone, and blue/red as above and below average, which is around 30%: 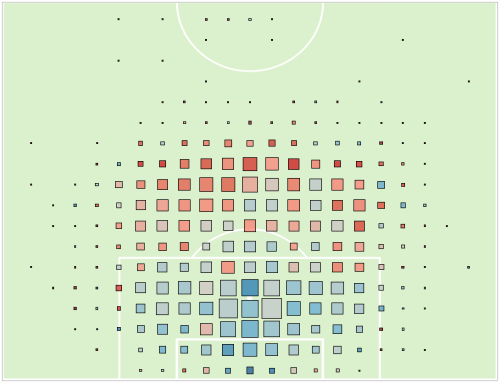 Most of the same filters apply here. We can look at left and right footed shots, headers, and the teams involved. Take a look: Shots on Target per Shot.

As you can see from the map above, shots from inside the box and at a reasonable angle are invariably more likely to result in a goal or a save than shots from far out. Why not look to see if your team's defence forces attackers to buck this trend?

Of course, you have have a shot on target without it being of any danger whatsoever to the goalkeeper. What would be really useful is seeing the chance of a shot from a certain zone turning into a goal. Can we do that? Of course! I'm sure you guys have the gist of things by now, so I won't worry about finding a picture, but we can take a look at how often a zone from a given zone directly results in a goal: Goals per Shot.

The above links aren't intended for use as a database (I don't even have player information, so they'd be of marginal utility), but for a fun tool to find big trends in shooting data. I hope they'll be useful, whether you want to check out shooting charts from an individual matchup or if you're looking at whole seasons worth of data. Happy hunting!