What's this then? We have a new #2 as Manchester City rise above their close neighbours for the first time I can remember. United, now embroiled in turmoil over the impending departure of Wayne Rooney, have been slipping up on the field too as of late - their 2-2 home draw with West Bromwich Albion certainly did the team no favours at all. Manchester aren't the only city whose teams did a switcharoo, though - Liverpool fell behind Everton after being comprehensively beaten in the Merseyside derby. 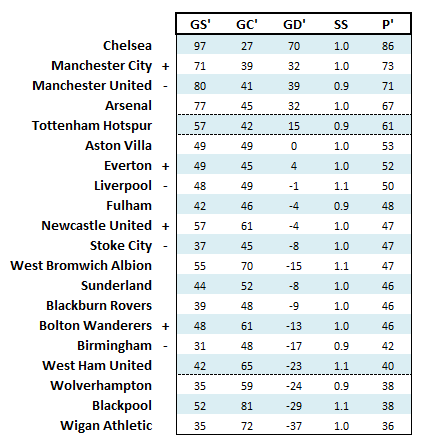 The above table is based on a Bayesian combination of my preseason projections and the current table with a strength of schedule adjustment. More detail after the jump.

*Note to self: Do not take pub breaks while writing posts.