Backing out: Terry to miss Montenegro game, returns to Chelsea

Share All sharing options for: Backing out: Terry to miss Montenegro game, returns to Chelsea

Good news this is not. The FA confirmed a few minutes ago that England's Brave John Terry will in fact not take part in England's UEFA Euro 2010 qualifier against Montenegro on Tuesday because of injury. 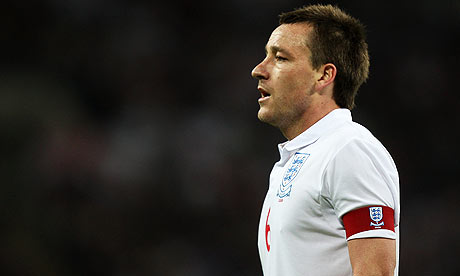 Hamstring. Then rib. Now back. EBJT simply cannot catch a break so far this season.

A back problem has forced the Chelsea captain to withdraw from this week's international. Terry has yet to feature for the Three Lions during Euro qualification (three games), missing the opening two with the aforementioned hamstring issue.

A statement on the FA website reads: "Terry was assessed by England medical staff on Sunday and will not be fit to play any part in Tuesday's game against Montenegro. No further call-ups will be made at this time."

I am curious to learn whether this injury is a recurrence of the back problem that has plagued Terry for several years now. Remember, he had surgery to remove a sequestrated lumbar intervertebral disc in 2006. If so, this could potentially rule him out of games for club. And, with Alex already missing, we can hardly afford to lose another defender, particularly one as influential as England's Brave.

Needless to say, we'll keep you posted on this situation as information becomes available.

International roundup
The Chelsea official site has posted a nice overview of this weekend's international. Below are the key points for quick reference. Be sure to check out the article.