Chelsea's visit to Hull City on Saturday is the latest football league match to fall victim to England's latest rush of blizzard-like weather. It's the fifth Premier League match to be postponed this weekend. 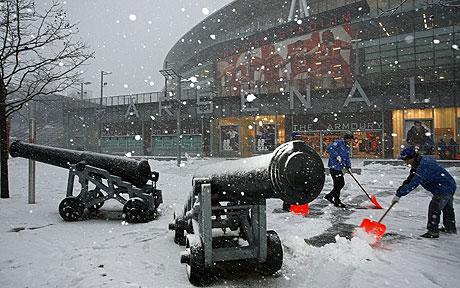 Hours earlier, Hull representatives were confident the match would be played. "Contrary to reports in sections of the national media, tomorrow's game is not in 'severe doubt'," a statement from the club read. "Efforts are continuing to clear snow from around the KC Stadium and the club is confident the game will go ahead."

Overall, this latest batch of postponements is far from needed. The fixture pileup is among us. From Premier League spokesman via Chelsea's official article: "It is unfortunate that these matches have had to be called off, however the advice from the statutory authorities in light of continuing adverse weather conditions was to postpone.
"Clearly the safety of supporters in these circumstances is paramount and the League and clubs have acted quickly to ensure as few unnecessary journeys are undertaken as possible. The Premier League will work with the clubs concerned to reschedule postponed fixtures as soon as practically possible."

Bonus: Chelsea boys have a little fun with the white stuff. No, I am not referring to cocaine.