Share All sharing options for: 2009: A year of emotion

To call Chelsea Football Club's final year of the decade an eventful one would be quite the understatement. To call it memorable would, also, be a disservice. Equal parts optimism, frustration, joy, pain, anger and pride, '09 was, really, a microcosm of the Abramovich era. We won, a lot. We lost, too, some in truly spectacular -- and controversial -- fashion. We hired. We fired. We played some brilliant football. We, equally, offered some pretty desolate stuff to the viewing public (Southend, Hull City).

At the close though -- as the ball dropped, so to speak -- we were celebrating. Whether it be another FA Cup, the club's fifth, or a Premier League perch at the turn of the decade, there was success to be had. Success ... yeah. That's how I would describe 2009.

Player of the Year
It must be, it has to be, Frank Lampard. Lampard was nothing short of phenomenal to close out the decade, one which he owned. Player of the decade, too? Of course. Super Frank closed the 2008-09 campaign with 20 goals -- again -- his fourth such accomplishment in as many seasons. 2009-10 has not be as kind to Lampard, a tactical change has forced re-adaptation, but he still has managed nine goals so far in 20 appearances.

Most Improved
Tough. Over a calendar year, it must be Branislav Ivanovic. Florent Malouda, though an inspiration alongside Hiddink, has failed to recapture under Ancelotti the form that made him arguably our best player in 2008-09's closing months. Bane, meanwhile, has steadily grown into perhaps one of the best -- no doubt one of the most versatile -- defenders in world football. His performance at Anfield was an introduction of fairytale lore. Who knew it was a sign of what was to come. More over, who knows if the injured Bosingwa will even be able to regain his once secure place at right fullback? I, for one, think not.

Best Goal
Could it be any other? Upon further review, this is still unbelievable.
Honorable mention: 10.31.09 - Bolton 0-4 Chelsea (Premier League) Total football.

Moment of 2009
2.14.09 - Watford 1-3 Chelsea (FA Cup)
Not what you were expecting? Let me explain, then. Scolari had just been sacked. Ray Wilkins was caretaker manager. We trailed. Then came Nicolas Anelka. And Michael Essien, after six months. It all came together on that day. The glue, later added, was Mr. Hiddink. 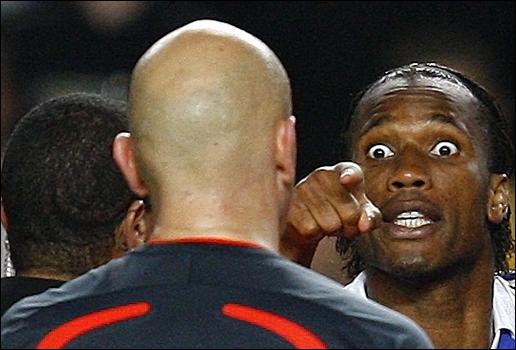