So that is, as they say, that. Straight from the official Web site ....

"Florent Malouda has reacted strongly to newspaper stories published ahead of today's win over Watford, suggesting among other thoughts that he is unhappy with Carlo Ancelotti's selection of Frank Lampard over him in some big games.

The stories in the English media were based on an interview given in French to a French publication. 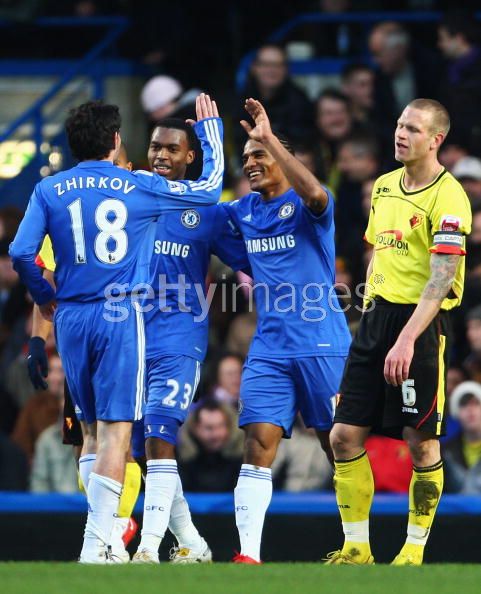 Flo celebrates his goal against Watford on Sunday.

What did Florent Malouda say and how is Florent Malouda?
Nothing that you could read today came out of my mouth. I was really shocked and surprised when I came and we had a meeting at quarter-to-12 when I discovered my words.

My reaction was to go and talk with the manager and talk with Lamps [Frank Lampard] and the meeting was clear. The rest I don't want to talk about that because they did it on purpose and tried to put trouble in our team. I would say that is disgusting and that is why I am proud of the way we played tonight because that is the best way to answer and to show that we are partners and we are all trying to win things together. Me and Lamps have played together in the past and we will play together in the future

I did an interview in France and I said I am here in Chelsea to try to do a career like Ryan Giggs and like Javier Zanetti at Inter Milan, which is why I am looking for the future. I have too much respect for the fans to speak in those terms and for me it is clear, the story finished.

I think Lamps and me reacted very well on the pitch. He scored a wonderful goal and me a goal off my shin and it was a good day to score for me. We have to look forward and I don't care what is written because I know it is not coming from my mouth.

How do you feel because you have not played so much recently?
Unfortunately I was banned for the Fulham game but I feel good and fit and I have the confidence of the coach and my partners. We have so many games to play and so many positive things to do that I don't give so much importance to these kind of things. I am a positive person and we work hard every day in training and we know how things like that can happen.

I hope the fans give support to the team because when people write things like this they are trying to put trouble into the team and we are so good and we can not afford this.

In his post-match press conference, Carlo Ancelotti added:
'I spoke with Malouda, I explained my position, he explained his, for me it was finished there. There was no problem. It is normal that a player wants to play every game. For us Malouda is an important player and he wants to play important games. For me every game is important and he played a lot of games.
'When I was a player and I didn't play I was a little bit frustrated. It is important for when a player doesn't play to have a good reaction. Malouda is doing professional work.'"