A potential blizzard -- only a winter wonderland at the moment -- is currently wreaking havoc on my Internet connection. I do apologize.

Here is a quick look at how our boys stacked up in the mastery of Birmingham. Enjoy (or don't).

RB - Branislav Ivanovic 6.5
Nothing flashly, as usual. Solid, as always. 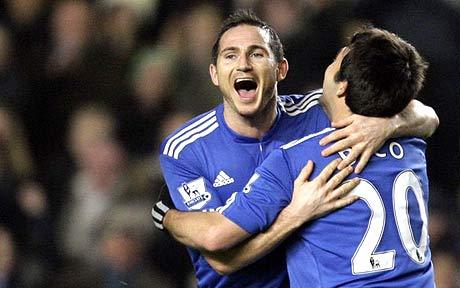 CB - John Terry 8
Terry is about to enter a difficult stretch with the off-field revelations which surfaced Friday. Regardless, his play has yet to be effected by anything this season. Another imperious display.

CB - Ricardo Carvalho 7
Struggled maybe a tad with Chuco, but otherwise another good performance from the Portugese. Denied a goal by the near post in the opening half.

LB - Ashley Cole 7.5
Continues to prove he's the finest left fullback in world football -- though I guess you could argue he's been a left winger for the past month or so.

MF - Deco 7
Grew as the match progressed. Provided some telling balls, though to be fair there were several wayward ones as well. Was impressed with his combativeness.

MF - Michael Ballack 7.5
Continues to impress in this second renaissance of sorts. Seems to provide such balance to the side. Unlucky not to score.

FWD - Florent Malouda 8
More of the same from the Frenchman. It's amazing how the return to form of so many has coincided with the new system. The Frenchman was lethal, as his opening goal would attest, and looked dangerous in nearly every roam forward.

FWD - Joe Cole 7.5
Great to see, this. Joey's struggle has been well-document; lively, industrious yet no real substance. City may have been the turning point. Played a key role in two goals, including the opening which arrived just five minutes into the match. Has yet to find the net -- much-needed -- but it's coming.

FWD - Nicolas Anelka 7
Not what we've come to expect from the Frenchman -- his recent displays being world class -- but this was another excellent outing. His movement, and ability to create, continues to set a tone.