A frustrated Florent Malouda speaks to L'Equipe. Not good.

Sure, the French outlet isn't the most reliable in the world, but some of this has to be accurate. Right?

Flo takes a shot at the formation and his lack of opportunities so far this term. The French international even targets Super Frank Lampard. Whoa.

Even if Flo's right -- which he is -- you don't throw rocks at a teammate. That's a nosign. Futhermore, I guess that whole dressing room unity thing Carlo has been highlighting recently isn't quite what he thought. I can feel the tension. 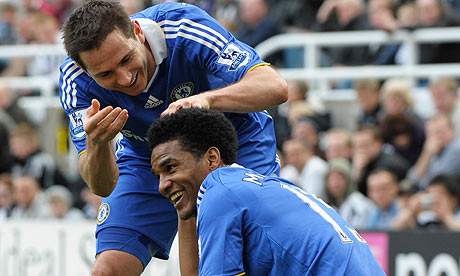 This relationship not as peachy as previously thought?

Anyway. On with the quotage: "Carlo Ancelotti's tactical system is physically very demanding. Recently we showed less intensity, the game was less fluid. But that system allowed us to be in our current position. All the players support it.

"Before the match against Birmingham, I talked to the coach. I told him about my frustration. I believe I have succeeded in my start to the season, but during the key matches against Arsenal or Man Utd, I was on the bench.

"I have ambitions for the World Cup and considering my status in the French team it is a little annoying (being on the bench). Ancelotti is aware of it. But currently I am paying for that system. It is not that easy for him either, he has a big group to manage.

"My competition with Lampard as left midfielder? It is his best position. He played like that in the England team, and we are in a World Cup year. But at a certain point, the status has to be in relationship with the performances. Anyway, I am fine so far. I could still be outstanding when I play.

"The frustration is big matches. However, if there is no place for me in that system, I could go somewhere else. Finding a new club is not a problem. But the club has closed the door to any departure either in January or in June. The coach relies on me.

"I feel fine at Chelsea. But now, things have to change. When I came I was labelled as Mourinho's player. I have known five coaches and each time I have had to start again from scratch. Last season I earned a key-player status. Today it has been questioned again."