Though I'll attempt to provide my own words on what proved to be a casual kickabout in Deepdale over the weekend, I believe this little lead-in from the Independent is a rather adequate description...

Steve Tongue, Independent: "A misty Lancashire lunchtime and an opposing manager called Ferguson held no terrors after all for the FA Cup holders, who sauntered into the last 16 of the competition despite leaving out half a dozen of the players who had demolished Sunderland the previous week. For much of the time it must have felt like a training game in leafy Surrey as Chelsea knocked the ball around among themselves while doughty locals bellowed 'hit him!' or 'get stuck in!'" 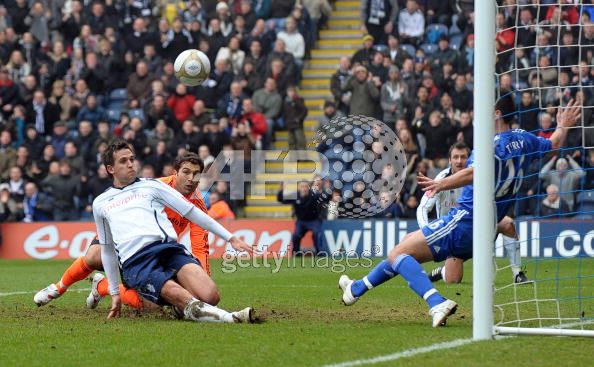 Miss of the season?

Anyway. On with our player ratings.

GK - Hilario 5.5
Not a confidence-inducing display. At all.  Shaky, particularly early with three wild flaps at the ball. Would have been punished, if not for Darren Carter's unbelievable miss.

RB - Paulo Ferreira 7
Surprisingly solid. Probably deserved a goal with his ferocious half-volley in the first half.

CB - John Terry 7.5
Continues to impress this season. Subtle, understated, yet impenetrable. Made it look almost too easy. Provided the header that led to the all-important second goal.

CB - Alex 6.5
Overshadowed -- again -- by his central defensive power. The good news is that the Alex we saw against Sunderland was nowhere to be found.

MF - Ballack 7
Is Ballack the key to our success? Let's not get carried away, but Chelsea usually wins with the German captain in the XI. A domineering performance, particularly defensively, while providing enough zest in attack to trouble Preston at times.

MF - Belletti N/A
Unfortunately, a knee injury forced the Brazlian's withdrawal after only 20 minutes -- a genuine concern. Hopefully his removal was precautionary, and just that.

MF - Lampard 7
Relatively solid performance from Super Frank. It appears his injury, perceived to be a hamstring strain, will not keep him out of Wednesday's match against Birmingham. Shew.

MF - Deco 6.5/7.5
Struggled at the tip of the diamond (no surprise). Belletti's injury, however, forced him deeper and the Portugese excelled. Provided a Prilo-esque shift, sharp passing and even some good tackling. Take this display for what it's worth, though: It was against a team that struggled to find possession and provided us with time on the ball.

FWD - Anelka 8
More of the same from the revived Frenchman. Great movement, great everything.

FWD - Sturridge 7
Quickly settling in. Added another poacher's goal to his tally. His goal celebration has divided opinion, but I don't mind it one bit. We need that kind of confidence -- no, arrogance.

Substitutions
MF - Malouda 7
Followed up his imperious work against Sunderland with another quality shift. Posed a threat all day.

MF - Joe Cole 6
Just not doing it for me. You can't fault the effort, he's trying, but it's just not coming off for him at the moment. I'm rooting for ya, Joey Boy!

Man of the Match
LB - Yuri Zhirkov 8
I had high expectations for the Russian after seeing him in the preseason.  It looks justified now. The injury-bug appears behind him, and you can tell -- his confidence is soaring. Slotted in seamlessly for Cashley. Smooth in attack, solid in defense. Many of our finest moves worked through him.